Jewish lawyer on a mission

Human rights lawyer David Matas, who has been focusing for years on combating anti-Semitism, explains why he is putting so much effort in stopping organ transplant abuse in China

The two investigators published reports concluding that the Chinese regime is killing its own citizens, most of them Falun Gong adherents in order to harvest their organs for profit.

David Matas, who is the honorary senior legal counsel of B'nai Brith Canada, has been investigating these crimes since 2006.

The conclusion of the investigation about the forced organ harvesting conducted by the Communist regime in China sounded unbelievable when first published. But in recent years more voices all around the world confirm that Matas was right.

"One of the lessons we’ve learned from the Holocaust is that human nature does not change,” Matas stated to The Epoch Times. “What changes is the technology, but the capacity for doing evil remains the same.”

"Waiting times for transplants of organs in China are days and weeks. Everywhere else in the world, waiting times are years or months... A short waiting time for deceased organ transplant means the presence of a large bank of living organ sources ready to be killed in order to assure such waiting times," says Matas.


On October 3, 2012, 106 Congress members sent Secretary of State Clinton a letter asking her to release information about transplant abuse in China that the US government might have in hand. The forced organ harvesting in China was recently discussed in the European parliament and various international fora.

Israel has played a part in the international efforts to fight these bloody crimes. Israel passed a law in March 2008 banning the sale and brokerage of organs abroad. The law also ended funding, through the health insurance system, of transplants in China for Israeli nationals.

Prof. Jacob Lavee, head of the heart transplants unit at the Sheba Medical Center at Tel Hashomer, in his contribution to the book “State Organs,” explains this law as a reaction to transplant abuse in China. The Israeli High Court supported the decision as well.

In 2010, Matas and his colleague, David Kilgour, were nominated for the Nobel Peace Prize by Canadian MP Borys Wrzesnewskyj and Balfour Hakak, chairman of the Hebrew Writers Association in Israel.

Matas, who has been focusing for years on anti-Semitism combat, explains why he is putting so much to investigate the forced organ harvesting in China now.

“Once I had come to the conclusion that innocents, prisoners of conscience, were being killed for their organs, I could not just shelve the report David Kilgour and I had written and do nothing. The wrong called out for a remedy. As a human rights activist and advocate, as well as a researcher and writer, I began to campaign for that remedy.”

France is considering proposed legislation to follow the Israeli example and prevent its citizens from going to China for organ transplants. But many countries have not taken any real measures to fight these crimes in China.

Matas says that he, as well as other people of conscience around the globe, “must work to put in place to prevent abuses of organ transplant abuse, as well as to bring to justice perpetrators of that abuse." 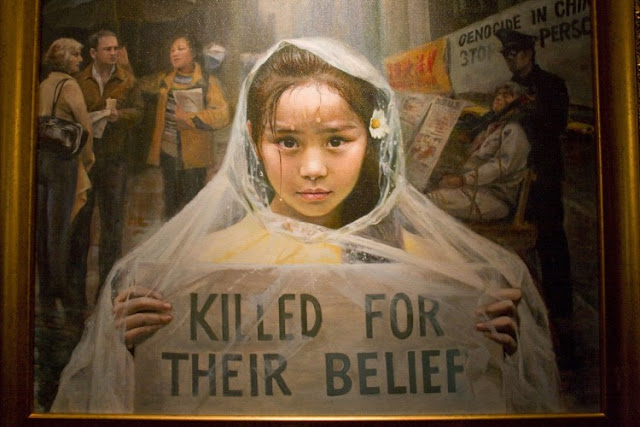 ART THAT AWAKENS THE SOUL

The exhibit has toured in more than 50 countries, including 500 exhibitions across the globe inspiring millions of viewers.

"This is the best classical arts I have seen. Words cannot describe how precious these paintings are."
-- Renowned Pennsylvania sculptor Karl Stirner

Everyone is encouraged to come see this inspiring, deep, and beautiful art show. Free admission

Posted by MaKina at 6:50 PM No comments:

Chinese nationals who attempted to investigate the abuses risked losing their careers, freedom, and lives. Foreign journalists could lose their work permits. Falun Gong who acted as informants to foreign media were imprisoned, tortured or worse. In October 1999, party leaders labeled the practice “an evil cult” to justify its ban retroactively and undermine sympathy in the West.

For the period 2000-2005 alone, Matas and I concluded that for 41,500 transplants done, the only plausible explanation for sourcing was Falun Gong.

Then Party leader and president Jiang Zemin strongly appears to have been “jealous” of Falun Gong and “obsessed” with eradicating it. By creating a national campaign, he sought to consolidate political power in himself and to eliminate a movement he perceived as a threat to his power.

From the start, Falun Gong practitioners had no desire to become involved in politics and never intended to challenge the Party. Even after nearly 14 years of persecution, their only political objective is to seek peacefully to end the persecution across China.

More: The Epoch Times
Posted by MaKina at 7:31 PM No comments:

CBC: 11 Feb - McMaster University is closing the doors on an institute that teaches Chinese culture because of what it believes are its discriminatory hiring practices.

The university is ending its contract in July for the Confucius Institute, a five-year-old office funded by the Chinese government. The closing comes after McMaster investigated the practices used to hire Chinese instructors to work at the institute.

“We were certainly concerned about the hiring decisions that were being made in China,” said Andrea Farquhar, assistant vice-president of public and government relations at McMaster. “The way the university normally functions is incongruent with the way decisions were being made there.”

The Confucius Institute's headquarters in China could not be reached for comment.

The move comes in the midst of an Ontario Human Rights Tribunal challenge by Sonia Zhao, who was hired as an instructor at the McMaster institute in 2010. Zhao says she had to sign a contract ensuring that she would not practise Falun Gong. She left her job in 2011 and filed the human rights challenge in 2012.

Falun Gong is a mainly spiritual movement that began in China in 1992, borrowing partly from Buddhism and Taoism, but also incorporating daily practices and some references to beings from other worlds. It has been attacked by the Chinese government as a cult that engages in "lawbreaking activities."

“There had been some concerns raised well in advance of that,” she said. “We had heard from different voices both inside and outside of the university who wanted us to take a look at this.”

The university's concerns, Farquhar said, revolved around freedom of expression and choice. McMaster decided to close the institute late last year and went public with the decision this month.

There are 11 Confucius Institutes across Canada. They are non-profit organizations with a stated mission to teach Chinese language and culture. But some people are concerned that the Chinese government uses them to exert Chinese influence in Canada.

Among them is Joel Chipkar, vice-president of the Falun Gong Association of Toronto, which is helping with Zhao's case.

“They've been linked to trying to influence Canadian-Chinese policy,” he said. “They're basically seen as the soft power of the Chinese propaganda campaign.”

McMaster's decision is an encouraging one, Chipkar said. He hopes other universities follow suit.
“We think McMaster's stand is a righteous one.”

They provide much-needed instruction in the ways of China, he said. But they are tied to the Chinese government and come with certain beliefs in terms of Falun Gong, Tibet and other issues.
It's not a new concept for governments to exert “soft power” through educational centres, Burton said. Canada has done it, too. Confucius Institutes are unique, however, in that they are part of their host universities.

Chinese instruction is important, and McMaster students need it, he said. In that way, the institutes provide “enormous benefits.”

“My personal preference would be for McMaster to continue instruction in Chinese language and culture and not do it with funding from a foreign government.”

Zhao and McMaster meet with a mediator on Feb. 14. Neither Chipkar or Farquhar could predict the outcome.

From McMaster's perspective, however, the Confucius Institute will be expected to wrap up in July.
“The programs students are taking will all be completed,” she said. “Instructors who are here will finish their time and will return to China. All those plans will go ahead.”
Posted by MaKina at 7:22 PM No comments:

Families of transplant recipients told Matas and Kilgour they were denied information about the donor, doctors, or support staff. International investigators are also denied entry into China’s labour camps.

“The way we find out about labour camps is we talk to people who have been in them and then get out of the camps and out of China.”

Thousands of disappeared Falun Gong adherents are unaccounted for in China, including Michelle Zhang’s sister. Zhang, who now lives in Toronto, said her sister, Yunhe, disappeared within the prison system after her 2002 arrest. Prison officials now deny ever having detained Yunhe.

Liberal MP Irwin Cotler said the amount of evidence that organ harvesting is taking place in China demands that Chinese authorities acknowledge and disprove the allegations.


“The burden of proof at this point must be on the Chinese authorities,” Cotler said.


Conservative MP Scott Reid, who chairs the committee, worried that the profitability of organ harvesting could make it harder to extinguish.

Posted by MaKina at 7:40 PM No comments: