The producers of a glitzy variety show - with song-and-dance numbers dramatizing Falun Gong persecution among its musical depictions of Chinese history and culture - are accusing the Chinese consulate of bullying sponsors of a performance next week in Calgary into withdrawing their support.

New York-based Divine Performing Arts is scheduled to stage several Chinese Spectaculars in Alberta starting next week, with controversial dance acts such as The Risen Lotus Flower and The Power of Awareness, as it winds down its 65-city world tour.

Tourism Calgary was supposed to host an opening-night reception for the internationally renowned troupe's April 30-May 2 performances in the city. It was also planning to welcome some of the singers and dancers with its signature White Hat ceremony, as it did when the group passed through town last year, which recognizes visitors as honorary Calgarians.

Travel Alberta, the provincial tourism body, had also agreed to put up the performers in Banff for three days before their three-date Edmonton engagement May 5-7 in exchange for television advertising on the producer's Chinese-language satellite television station, New Tang Dynasty TV.
But both Alberta travel organizations have now pulled their participation.

The reason, said Caylan Ford, a spokeswoman for NTDTV Canada, conveyed in e-mails and phone conversations with the agencies, appears to be disapproval from Chinese officials.

"That was basically the message -- they were told not to have a direct relationship with this show," she said. "We have no ill will toward them or anything. We wish they would have taken a stronger stance, but I can understand they were put in a very difficult position. They said that they really have to do business in China and this could endanger that."

One e-mail, distributed by the show's backers, went so far as to cite an intervention from China's official diplomatic representative in Calgary and referred to the affair as "a sensitive situation."

"Our managing director has received implicit instruction for full cooperation from Wi Xinjian, Consul General of [the] Chinese Consulate," a Travel Alberta employee wrote. "I am truly sorry that I have been instructed to rescind all services to facilitate the visit."

Calls were not answered at the Chinese Consulate in Calgary Thursday.

Travel Alberta did not return calls.

"This is a systematic, premeditated violation of our national sovereignty in Canada and of free speech and artistic expression in Canada," complained Ms. Ford. But she said it is not an isolated incident.

"This happens in every city and every country that this tour group performs in. The Chinese consulates and embassies go to great lengths to interfere with it however they can. They've threatened performers, venues, elected officials, sponsors, even national governments, telling them not to support this show or not to allow this show to play."

Malaysia cancelled the group's shows in the country in March, with an unnamed official saying in news reports: "We have to take care of our relationship with China."

All this over a stage show that features such sequences as the Tibetan Sleeve Dance, the Mongolian Chopstick Dance and or the Drummers of the Tang Court, often by elaborately costumed performers glistening with sequins.

The People's Republic objects to Divine Performing Arts' sympathetic portrayal of the spiritual movement Falun Gong, which is outlawed in China.

At least one number in the production is quite "explicit" in showing Falun Gong practitioners resisting authorities, said Ms. Ford. There are also personal proclivities at play among some cast members, she added, such as the principal dancer whose mother was "tortured to blindness" for belonging to the sect.

This is not the first time China has tried to stymie Divine Performing Arts' shows in Canada, said Joe Wang, the president of NTDTV Canada, but it's the first time they've been so successful.

City councillors in Toronto have passed along letters from Chinese diplomats urging them not to attend the show when it passed through town in January, said Mr. Wang. Artists, dignitaries and sponsors are widely believed to have been dissuaded from supporting the production.

"Different people react differently," he said. "Why do they pick on this show? To be honest they are probably right... It's a powerful show with a strong message in there."

Posted by MaKina at 8:38 PM No comments: 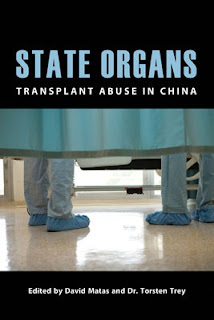 David Matas presents a collection of essays from four continents that provide facts and witness accounts on the practice of illegal, forced organ harvesting from prisoners in China. Referring to the international code of ethics, the author will discuss what needs to be done to end the killing of Chinese prisoners for their organs.

Co-editor and contributor David Matas is the co-author, with David Kilgour, of “Bloody Harvest: The Killing of Falun Gong for Their Organs.” For their efforts in combating Chinese organ transplant abuse, Matas and Kilgour were nominated for the Nobel Peace Prize in 2010.

Free admission
Presented by Seraphim Editions
Posted by MaKina at 5:23 PM No comments:

US House Members Seek Answers on Transplant Abuse in China

Andrews and Smith refer to “testimony implicating Chinese hospitals and doctors in the practice of forced organ harvesting from prisoners, to allegedly include from living practitioners of the Falun Gong spiritual movement, Uyghurs, Tibetans and House Christians.”

The letter to Clinton asks in particular for the release of documents regarding organ harvesting that former Chongqing deputy mayor Wang Lijun may have transmitted during his stay in the U.S. Consulate in Chengdu, Sichuan Province, on Feb. 6.
“If such evidence was received and brought to light,” the letter states, “measures could be taken to help stop such abominable abuses.”
Out of a total House membership of 435, 106 representatives from 33 states signed the letter to Clinton, as of Oct. 3 when sponsorship closed.

There do 10,000 organs for transplantation come from in a country that has no functioning organ donation system? That question has pushed against the Chinese regime’s [...]

Posted by MaKina at 4:56 PM No comments:

DC - The letter may help direct President Obama’s attention to congressional interest in the issue of organ harvesting in China.

On the previous day, Oct. 4, 106 U.S. congressmen, approximately one-fourth of the membership of the U.S. House of Representatives, co-signed a letter to the Secretary of State, asking to “release any information” the State Department has “relating to transplant abuses in China.”
The CQ Global Researcher has reported that investigators into organ harvesting in China estimate that in the years 2000-2008, 62,000 Falun Gong practitioners were killed through forced live organ harvesting. The human rights lawyer David Matas (co-author with David Kilgour of the groundbreaking book “Bloody Harvest”) estimates that each year 8,000 practitioners are killed by forced, live organ harvesting.
The persecution of Falun Gong was launched by former Chinese Communist Party (CCP) leader Jiang Zemin in 1999. According to the Falun Dafa Information Center
More at the Epoch Times
Posted by MaKina at 4:22 PM No comments:

The Epoch Times has learned of several cases of Falun Gong adherents being arrested by the security forces of the China National Offshore Oil Corporation (CNOOC) and its subsidiary, the Bohai Oil Corporation.
In total, the company has persecuted over 100 employees for practicing Falun Dafa, says a spokesperson for the group.
More at the Epoch Times
Posted by MaKina at 4:17 PM No comments:

Calgary - China National Offshore Oil Corporation’s bid to buy Nexen should not be allowed to proceed if the state-owned company continues to persecute Falun Gong practitioners in China, demonstrators in Calgary argued on Tuesday.

“If we allow this to happen, really, what are we becoming?” said Jenny Yang of the Calgary Falun Dafa Association. “This is a monstrous crime against humanity.”

Demonstrators set up a mock surgical operation in front of city hall as a graphic illustration of one of the most horrific allegations against the Chinese government, namely the live harvesting of organs from practitioners of the spiritual discipline that has been outlawed in China.

There is significant evidence that CNOOC persecutes followers of Falun Gong among its own staff, said Calgary Mountain View MLA David Swann, who took part in the demonstration.
In addition to labour camps and brainwashing programs, that persecution includes “potentially submitting them to the same type of forced organ donation that we have heard so much about in the last five years,” Swann said.

Shareholders of Nexen, a Calgary-based oil and gas giant, have approved CNOOC’s offer to buy the company but the deal is currently under review by the federal government.
More at Metro News

Posted by MaKina at 4:12 PM No comments: