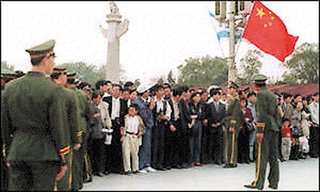 Say no to revolution; spread the Nine Commentaries far and wide!

You don't need to be Chinese to read the Nine Commentaries. In fact the uncensored history of the CCP can be quite sobering especially for those Westerners who might have been already conquered by the dazzling and electric image of Communist China. For the flip side of the coin you can read the revealing series here. Does it have the power to stop revolutions...Gao Zhisheng seems to think so and I agree.

Epoch Times by Gao Ling - 1 May 2006 - It is again April 25th, the anniversary of the day in 1999 when more than 10,000 practitioners peacefully appealed at the Chinese Communist Party (CCP) government compound in Beijing for their basic rights to practice Falun Gong [1]. Over the past seven years, Falun Gong practitioners have commemorated and called for a stop to the persecution on this day. This year is unique in that attorney Gao Zhisheng, who had delivered open letters to the CCP supporting Falun Gong, now stands beside Falun Gong practitioners. An individual in Tianjing City once appraised Gao Zhisheng's letters as having "Thoroughly wiped out the evil names that the Chinese Communist Party (CCP) had tried to impose upon Falun Gong." Many people in China began to see the facts of the persecution of Falun Gong through Mr. Gao's letters. His subsequent harassments by the CCP also drew international attention. On this special occasion and while the brutal persecution of Falun Gong continues, Mr. Gao says, "Keep up the good work!"

Chinese People's Resentment Heightened to a Level of Launching a Revolution

Mr. Gao explains, "I am not exaggerating. The overall resentment of the Chinese public, including that of officials, workers, protestors, and even the military, has increased to a critical level sufficient to launch a revolution." As a farmer in Shanxi Province once said, "We have all the elements necessary for a revolution. The Chinese government tries it's best to conceal this fact, but in reality, the intense resentments continue to grow."

Mr. Gao describes in a recent telephone conversation, an unidentified caller said, "Many people refuse to wait any longer. What are you trying to accomplish by resolving problems in a peaceful manner? We have accumulated forces in every city and province and are ready to take action simultaneously."

During this conversation, the caller continuously changed locations and phone numbers to protect his identity. Mr. Gao repeatedly stressed the idea of reforming China through non-violent means. In the end, Mr. Gao kindly refused the caller's invitation to other methods of reform.

The CCP has admitted to over 80,000 individual group protests this past year in China. The rage of citizens has grown to an intolerable level that has ultimately lead to such expressions of unrest. If this is the case, is there any possibility that this rage can be resolved in a peaceful manner?

Mr. Gao stated, "I believe that there is a chance to solve this problem from its core and eliminate the fundamental causes for this rage—the evil CCP system. However, if this evil rule does not change, then this rage will only continue to increase and accelerate."

Mr. Gao also spoke about a recent case he had heard about: "I've just received phone calls from Harbin City and Shenyang City. They all talked about incidents where Christians were beaten by the police. Although these cases happened at different locations and with different victims, the methods used by the police were identical."

These Christians told Gao that after they were first arrested, the police then released them on bail. A year later, after the police had illegally collected the bail payments from the Christians' bank accounts, they were arrested again and forced to write confessions dictated to them by the police. The Christians did this in order to avoid future arrests. On average, each of them was blackmailed out of 20 to 30 thousand yuan (US$ 2,500 to $4,000).

The Nine Commentaries Helped Me Understand the CCP

Facing ever-raising indignation in China, some people prefer violence, some persist in peaceful reform, while others maintain a pessimistic stance. The widespread distribution of the Nine Commentaries on the Communist Party (The Nine Commentaries) accompanied by the huge wave of withdrawals from the CCP has captured international attention.

Mr. Gao said, "In my opinion, the crux of China's problems is the evil system currently maintained by the CCP. Once the CCP collapses, this system will naturally disintegrate. However, many people still hold unrealistic perceptions of the CCP. How can we help these people eliminate such false hopes or improve their understandings? The Nine Commentaries provides a good means for people to see the CCP for what it is. I believe that spreading The Nine Commentaries is presently the most peaceful and effective way of reforming China. In fact, as you have all seen, The Nine Commentaries' effect on China is already in progress. The number of people withdrawing from the CCP every day continues to break previous records."

Attorney Gao said, "I can say that I now have a better understanding of the Chinese Communist Party (CCP). The Nine Commentaries was very helpful. And this is not only my personal opinion."

Someone from Chongqing told him, "Attorney Gao, I distribute hundreds of copies of The Nine Commentaries to my fellow countrymen every year." He described to Attorney Gao his personal transformation—"Previously, as did most Chinese, I also trusted the CCP without doubt. I felt so sad that first time I read The Nine Commentaries . So I read it a second time and then a third time. Then, I started paying attention to the actions of the CCP which directly affected my daily life."

After that, this person read the three open letters written by Attorney Gao. Now, he has quit the CCP and has been urging his friends to quit as well. He said, "Attorney Gao, now that I have quit the CCP, I feel my soul has been cleansed."

Attorney Gao said, "I think what he said is also a reflection of my own thoughts. Just as I wrote at the end of my CCP-quitting statement: This was the proudest day of my life!"

Attorney Gao said, "Actually, we really did not question much about the CCP's past actions and rules before, especially because we did not know its past history. Someone once asked me why I had not cared about Falun Gong during the previous years and why I only started to pay attention recently. Before 2003, I really did not think about whether it was unjust for the CCP to suppress Falun Gong. I was not intentionally seeking anything when I read The Nine Commentaries , but it has transformed our minds step by step."

Since the end of 2005, Attorney Gao's fate has been joined together with the cultivation practice of Falun Gong, which has now been persecuted for almost seven years. They have one thing in common: each did not give up their beliefs under the pressure from the CCP, but rather each grew stronger in the resistance against the persecution. On April 25, the date that Falun Gong practitioners commemorate and the date that the CCP is most afraid of, what does Attorney Gao think about this?

Correspondent: So, what is your vision of the future of yourself and of Falun Gong?

Attorney Gao answered, "I am quite optimistic about my own future. I will absolutely be around longer than the CCP. As a human being, my life will eventually end. However, I am certain that I will outlive the CCP. I am very optimistic about this."

"As for the future of Falun Gong, I feel most relieved that the CCP no longer suggests that they will "eliminate Falun Gong within three months." As I have said before, even two more CCPs will not be able to suppress Falun Gong!"

Correspondent: Then, at this special period of time, would you like to say something to the practitioners of Falun Gong?

Attorney Gao replied, "April 25 has come again. There are not many congratulations which I can offer since the majority of practitioners are still being persecuted in mainland China. But, I still want to offer a few words: Keep up the good work!"

Notes: [1] On April 25, 1999, more than 10,000 Falun Gong practitioners in China went to the Appeals Office of the State Council on Fuyou Street in Beijing to make an appeal in accordance with the law. They wished to ask the authorities to release the Falun Gong practitioners who had been arrested by the Tianjin public security officers. After Premier Zhu Rongji, the official head of the State Council, personally came out and met with practitioners, the situation was handled and a resolution was reached that was acceptable to both the government and the practitioners. However, after the "April 25th Incident," Chinese president Jiang Zemin used two secret documents to accuse Falun Gong of two crimes that he wanted to charge them with – namely conspiring with foreign forces and being directed by senior insiders in the Communist Party. In the absence of any corroborating evidence, Jiang decided on a policy of persecution. Please refer to this link for detailed information.

[2] The current situation of Attorney Gao: Attorney Gao still spends much of his time at home except during morning exercises which are performed outside. His movements are limited as he is constantly under police surveillance. With him staying at home, the police keep a distance from him. There have been some very funny stories. Please read our other reports.
Posted by MaKina at 11:20 PM