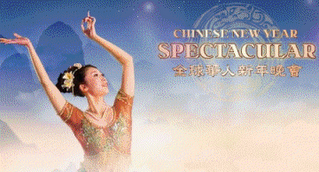 "NTDTV Brings the Divine Beauty of the Ancient East to Life With its Now Legendary Chinese New Year Spectacular!

Join us for a journey across oceans and centuries to the world of China's legendary golden age - the Tang Dynasty. Experience a world of mythical dragons, heavenly maidens, and exhilarating drummers as they evoke the beauty and grandeur of ancient traditional Chinese culture.

Now in its fourth year, the 2007 Chinese New Year Spectacular is going to be grander than ever, touring 26 cities worldwide.

Our celebration in Vancouver has also grown, and this year we will return to the magnificent Queen Elizabeth Theatre on January 3, 2007 for a run of two shows at 2pm and 8pm, with all new performances by world-class artists from New York. From the soulful poignancy of the two-stringed erhu to the stirring rhythms of a Mongolian plains dance, NTDTV's Chinese New Year Spectacular are truly events not to be missed. So this year, step out of the ordinary and into a realm of ancient pageantry with the leader in genuine Chinese cultural entertainment, New Tang Dynasty Television.