China’s most prominent rights lawyer and rights defender, Gao Zhisheng, has been arrested by the CCP a few days ago. Known as the Martin Luther King of China, Gao had been campaigning for blind human rights activist Chen Guangcheng who is being punished for exposing forced abortions. Attorneys Li Fangping, Xu Zhiyong representing Chen were also detained. One can only wonder what the dictators are up to.

Since the release of Jiang’s latest book the Selected Works of Jiang Zemin, Hu Jintao has called a campaign urging the populace to basically memorize the book. Because of this, I have a strong feeling that Jiang Zemin and Hu Jintao, who have clearly been opponents up to this point, have joined forces—Gao’s arrest, once protected under Hu’s faction, would inevitably confirm this theory. If this is so, this is a bad move for Hu Jintao who will likely be made accountable for carrying Jiang’s genocidal campaigns namely the persecution of Falun Gong. Considering that over 12 million Chinese have quit the party, the Jiang-Hu union is obviously a desperate attempt to save the Party (CCP). As usual “They are attacking the leading symbol of the movement to scare everyone else." (NY Times) 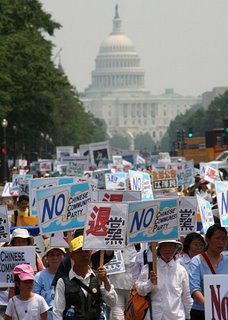 Before the 2008 Beijing Olympics all eyes focus on China as rights groups demand Gao’s release.

The burning question is: will there be an explosive reaction to Gao’s arrest? It wouldn’t be surprising as tension has been building up for quite sometime. An interview with Gao back in May affirms: "I am not exaggerating. The overall resentment of the Chinese public, including that of officials, workers, protestors, and even the military, has increased to a critical level sufficient to launch a revolution." As a farmer in Shanxi Province once said, "We have all the elements necessary for a revolution. The Chinese government tries it's best to conceal this fact, but in reality, the intense resentments continue to grow."

Mr. Gao added, "In my opinion, the crux of China's problems is the evil system currently maintained by the Chinese Communist Party (CCP). Once the CCP collapses, this system will naturally disintegrate. However, many people still hold unrealistic perceptions of the CCP. How can we help these people eliminate such false hopes or improve their understandings? The Nine Commentaries provides a good means for people to see the CCP for what it is. I believe that spreading The Nine Commentaries is presently the most peaceful and effective way of reforming China. In fact, as you have all seen, The Nine Commentaries' effect on China is already in progress. The number of people withdrawing from the CCP every day continues to break previous records."

Guo Feixiong said: "Therefore, I suggest that various international and domestic strengths need to be firm and unyielding in rescuing Gao Zhisheng. We are not rescuing one person, but China's entire morale and the human spirit. What we are helping is China's entire democratic movement and the human rights movement. Not only does it have an individual characteristic, but it also has a comprehensive overall significance."

Meanwhile Jiang is making his presence felt as he secures his re-entry into the politburo. The crackdown on rights lawyers speaks for itself and is unmistakably the work of Jiang Zemin.

Monday, Aug 21, 2006,Page 8 - While China is enjoying an economic boom, it is also faced with a great deal of depressing news. In fact, its dictators are exasperated because more than 12 million people have quit the Chinese Communist Party since the launch of the "Nine Commentaries" on the party. Hundreds of thousands of angry peasants have rioted on the streets and we have seen the shocking exposure of large-scale organ harvesting targeting Falun Gong practitioners.

Among the chaos, there is suddenly a new campaign to reinforce the party. Chinese President Hu Jintao's slogan for the campaign is a call to memorize Jiang Zemin's new book ("Jiang's book hits the `must read' list" Aug. 17, page 4).

I call it desperation. It is pretty safe to assume that this euphoria is not shared by everyone. In the West, Jiang will always be remembered as the butcher from Beijing who cleverly orchestrated the Tiananmen Square Massacre just to get ahead. He also began the persecution of the Falun Gong to gain more power.

His hands are stained with the blood of countless innocent people. He has put humanity to shame--why revere him?