Vancouver: At 3:05 a.m. on August 31st, while Falun Gong practitioner, Raymond Zhang, was doing his shift in front of the Chinese consulate while four Chinese men drove up in a light coloured SUV. Three of them got out of their vehicle and began to punch his head without saying a word. Luckily Raymond was in the hut and only suffered superficial injuries. Zhang said: “I think that this assault was either directly ordered by the Chinese government, or it is the result of hate-incitement perpetuated by the Chinese Communist regime in China and abroad.” 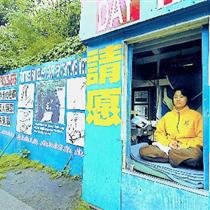 Raymond is one of 80 practitioners who goes regularly to the Consulate site to protest the mistreatment of his family members persecuted in China for their belief. Raymond’s mother, Yang Hui-shen who is a Falun Gong practitioner, has been arrested three times because as a physician, she talked to her patients about Falun Gong. Zhang says that his mother was picked up by the police after officers broke into her home, ransacked it and abducted her. He said his mother shouted "Falun Gong is innocent" as she was being led away into the labour camp. She has been illegally sentenced to 6 years in China since May 2004. Raymond sister's, Zhang Chun-gang, has been illegally jailed in Masanjia labour camp in China since May 2004. They were both forced to do hard labour. His sister went on a hunger strike to protest the inhuman persecution and was punished by being forced to stand for extended periods of time, humiliated, and subjected to male guards’ sexual advances. The latest news is that his sister is now in Thailand and apparently arrangements are being made for his mother to come to Canada.

But, it’s not hard to figure out that this kind of violence, at worst, is done to intimidate practitioners in their willingness to maintain their 24-hour appeal by scaring them. At best, we believe it is the result of the Chinese Communist Regime hate-incitement campaign targeting the Falun Gong at home and abroad to silence their voice. It is well documented that the Regime exports its hate to the overseas community through the Chinese media and materials distributed to VIPs via its Consulates. Is this what drove Mayor Sam Sullivan to ask the Falun Gong to pack up their 'blue wall' showing China's mistreatment of Falun Gong and see them in court? One can only assume the worst.

In fact similar assaults have occurred in Canada before. In February 2000, MP Rob Anders was physically assaulted at the Ottawa Parliament. Rob recounts (FGHRWG):

"I wore [a T-shirt that talked about Falun Gong] out to a function that was being hosted by the People's Republic's embassy here, in this building [Parliament]. I stood at the back of the room, and then all of a sudden I had four or five men surround me and start to harass me, and point fingers, and jostle me physically, saying that I had to leave, that I wasn't welcome, go home, you know, cowboy, you don't know what you're doing… and what crossed my mind immediately was four or five people that comprise a gang on behalf of the People's Republic of China think they can get away with doing that to me as a Member of Parliament, on Canadian soil, in my place of work, in the House of Commons - can you imagine what they're doing to people back home in their own country? It was absolutely over the top! And then when a media reporter came over with his camera, they started to grab his camera, they tried to force it down to the ground, they told him to go away… They were issuing orders to a
member of the free press here in Canada. … It was absolutely outrageous. And it just proved what Falun Dafa is up against. ... We're at a very critical moment. If we don't take a stand now, history will look back at us and sigh."

Mr. Xueliang Wang accepted the invitation to participate. Yet, to his surprise, the so-called “party” was in reality for the purpose of exhibiting pictorial materials that defame Falun Gong. Mr. Wang took out his camera to take photos and was abruptly dragged into a room by several people and beaten. Following this incident, the deceit and violence of the Chinese Embassy shocked all sectors of Canadian society and led to strong repercussion. Moreover, the incident led to investigations by the police and
related institutions.

“The e-mail message that I received only mentioned the movie party; it made no mention of the exhibit.” Mr. Wang said to the “WOIPFG”: “After I took photos, they forcibly pushed and shoved me, dragging me into a room one floor down. They closed the door and had someone guard the entrance. Afterwards someone violently punched at my head. Xiaolong Ma pressed me down on the floor many times and said to the others: ‘You go outside. I will take care of him.’ Then he took off his suit jacket, tightly twisted my arm, and struck me several times. In order to escape from legal responsibility, Xiaolong Ma deliberately struck me in places of the body that do not show injury easily so that he would not leave any traces of the beating.”

Similar incidents of intimidation and assault have also happened in the United States, Iceland, Germany, France, Russia, Thailand, Cambodia, Hong Kong, Argentina, South Africa, Singapore, and many more. Simply put, the Chinese regime has exported its persecution to the world as a global campaign of evil against conscience.

However this will not deter Vancouver practitioners who will remain in front of the Chinese Consulate on Granville, as they stated five years ago, until the persecution of Falun Gong ends.