As you are aware, the Honourable David Kilgour, former MP, and human rights lawyer Mr. David Matas concluded in their “Report into Allegations of Organ Harvesting of Falun Gong Practitioners in China” that “there has been and continues today to be large scale organ seizures from unwilling Falun Gong practitioners.” The report can be found here.

The widespread killing of Falun Gong practitioners for profit to provide organs for transplants is “so shocking that it represents a new form of evil in the world,” Mr. Matas said.

The report stated, “The policy of repression of the Falun Gong means that they are in prison without rights, at the disposition of corrupt authorities. The incitement to hatred against the Falun Gong and their dehumanization means that they can be butchered and killed without qualms by those who buy into this official hate propaganda.”

We call on all Canadians, elected officials, and NGOs to speak out against these atrocities and to take immediate action with regards to the recommendations in this report.

To this end, we invite you to attend a rally on September 26 on Parliament Hill: “Together Let's Stop Organ Harvesting of Falun Gong Practitioners in China.” 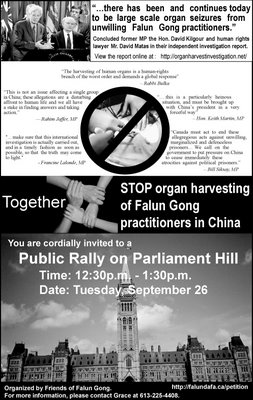 Meanwhile, please contact the Prime Minister and the Minister of Foreign Affairs today and request that they do everything in their power to:

Re: Urging the government to take imperative action to stop organ harvesting of Falun Gong practitioners in China

On July 6, the Honourable David Kilgour, former MP, and human rights lawyer David Matas concluded in their “Report into Allegations of Organ Harvesting of Falun Gong Practitioners in China” that “there has been and continues today to be large scale organ seizures from unwilling Falun Gong practitioners.” The findings in the report are extremely disturbing. I call on our government to take serious action in respect with the recommendations in this report.

After assessing 18 elements of evidence that the authors submitted were “verifiale and in most cases incontestable,’ the report stated that the horrific organ seizures represented a grotesque form of evil that is new to this planet. They considered that ‘organ harvesting of unwilling donors where it is either systematic or widespread is a crime against humanity.”

The report further noted that the Chinese government policy on Falun Gong has been to “defame their reputation, bankrupt them financially, and destroy them physically.” The policy of repression of the Falun Gong means that they are in prison without rights, at the disposal of corrupt authorities. The incitement to hatred against the Falun Gong and their dehumanization mean that they can be butchered and killed without qualms by those who buy into this official hate propaganda.”

This chilling report is consistent with abundant other information documenting the Chinese regime’s severe human rights violations against Falun Gong practitioners that has persisted for seven years.

This report tells the world that it must no longer underestimate and ignore these crimes against humanity. They are an attack on the moral conscience of all human beings. Canada needs to end its policy of appeasement in the face of Communist China’s human rights atrocities as soon as possible.

I urge the Canadian government to condemn this atrocity and take urgent measures in conjunction with the UN and other international bodies to further investigate and intervene.

National Post: China's bloody harvest by David Matas
Waiting times for organ transplants in China are a matter of days. Everywhere else waiting times are measured in years

There is no other possible source for the organs used in transplants between 2000 and 2005, says the report by David Matas, a Winnipeg human-rights lawyer, and David Kilgour, a former prosecutor who was also a federal Liberal cabinet secretary for Asian affairs.

"Where do the organs come from for the 41,500 transplants? The allegation of organ harvesting from Falun Gong practitioners provides an answer," the report says. The authors say they ruled out all other sources, including the relatively small number of other Chinese prisoners executed for crimes.

A new Chinese law governing organ transplants came into effect last week after reports in Western news media that Chinese hospitals were advertising on-line that they had fresh kidneys, corneas and other organs for foreign customers frustrated with long waits.

The law limits transplant surgery to a relatively small number of Chinese hospitals that must certify that the organs come from "legal sources." Hospital ethics committees must approve all transplants.

The authors say they welcome the new law, but wonder whether it is simply window dressing. Chinese authorities routinely ignore human-rights laws and are known to torture prisoners, Mr. Matas said.

The widespread killing of Falun Gong members for profit to provide organs for transplants is "so shocking that it represents a new form of evil in the world," Mr. Matas said.

"It's hard for anybody in this room to believe it. It was hard for us to believe," Mr. Kilgour said during a news conference.

Yet after a two-month investigation of the available evidence – much of it admittedly circumstantial -- the two men believe the allegation to be true based on a civil-law standard of "balance of probability."

They acknowledge that they have no direct evidence, but say that putting together the pieces, it is hard to come to any conclusion other than that healthy Chinese are being killed to harvest their organs.

The Washington-based Coalition to Investigate the Persecution of Falun Gong commissioned the report. Other international human-rights groups have said they are concerned by the reports of forced organ-harvesting, but do not have the evidence to prove prisoners are executed for this sole purpose.

Mr. Kilgour said he was shaken after listening to the in-camera testimony of a Chinese woman who said her husband, an eye surgeon, had participated in the harvesting of corneas from about 2,000 anesthetized Falun Gong prisoners in China during a two-year period ending in late 2003. The woman was interviewed in the United States, where she now lives. She does not want to be identified for her own safety.

The report acknowledges the difficulty corroborating the woman's story.

The authors also heard tapes and read transcripts of translated telephone conversations with Chinese medical officials who told Falun Gong members posing as patients that fresh organs were available on short notice at their hospitals.

The pretext calls were made over the past few months. In one call to a hospital in Wuhan, the caller asked whether the kidney suppliers are alive, saying: "We're looking for live organ transplants from prisoners, for example, using living bodies from prisoners who practise Falun Gong. Is it possible?" The hospital official replied, "It's not a problem."