This is an excellent interview by the way! 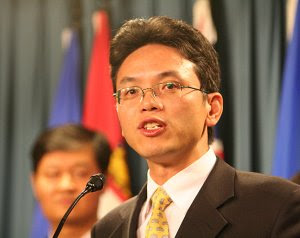 The Falun Gong Issue is a Priority

Excerpt: Chen said the CCP classifies people overseas into five groups and then tries to persecute them. These groups are Falun Gong, democratic activists, Taiwan, Tibet human right activists and Xinjiang human right activists. In recent years, the CCP has intensified the suppression. "The CCP's foreign policies are extensions of their domestic policies. It targets those who are perceived threats to the CCP's power overseas. The CCP now focuses mostly on Falun Gong because they have the biggest following and steadfast belief," says Chen, "Sixty percent of the CCP's effort (finance and manpower) is spent on suppressing Falun Gong, 20 to 30 percent on Taiwan, and five to ten percent on other issues." (more)