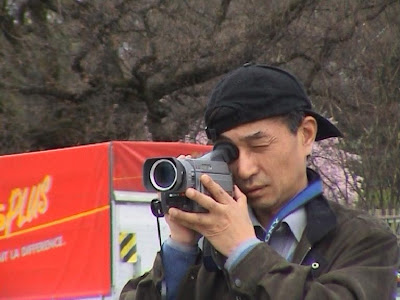 It’s not just human rights campaigners and pro-Tibetan activists who are under constant attack, however. Among the most viciously persecuted are individuals associated with Falun Gong, also known as Falun Dafa. The spiritual and philosophical movement was banned by the Communist regime in 1999 after officialdom decided it might represent a threat to the Communist Party.

Labelling it an ‘evil cult,’ China then created an extra-legal apparatus known as the 6-10 Office to quash the discipline domestically—and around the world. An unprecedented campaign of terror and brainwashing has since been unleashed, including a vast network of ‘re-education’ camps, disappearances, torture, harvesting organs from practitioners, and more.

And the regime’s tentacles have truly spread worldwide in pursuit of its goal. ‘The war against Falun Gong is one of the main tasks of the Chinese mission overseas,’ Chen Yonglin, a senior official at the Chinese Consulate in Sydney told a US Congressional committee in 2005 after his defection.

A vast body of evidence, and even recent court cases, support the claim. In June, for example, a Chinese man in Germany was convicted of spying on members of the Falun Gong community for China. A few years earlier, a senior Chinese embassy official in Ottawa was expelled after being caught spying on practitioners there.

In the United States, officials also regularly highlight the problem. The House of Representatives has blasted the regime for similar illegal activities inside the United States on at least four occasions. A House resolution passed last year and a separate measure adopted in 2004, for instance, recognized the seriousness of the problem, called for the regime to stop, and urged US authorities to take action.

According to the resolutions, China’s diplomatic corps is actively ‘harassing and persecuting’ Chinese dissidents in the United States, breaking into the homes of prominent activists, pressuring US officials with threats, spreading lies, and more. In addition to the well-known persecution going on within China, ‘the Chinese Government has also attempted to silence the Falun Gong movement and Chinese pro-democracy groups inside the United States,’ the measures state.

More than a few US Representatives have been even more direct. Foreign Affairs Committee Chair Ileana Ros-Lehtinen (R-FL), speaking in support of the resolution, said last year that ‘clear evidence’ shows Chinese diplomats were colluding with secret agents and ‘thugs’ to suppress the constitutionally protected rights of Americans. She called on the State Department to ‘get tough’ on the regime’s functionaries within US borders.

‘First is the issue of the penetration of agents of an alien Communist regime right here inside the United States to wage a campaign of repression against US citizens,’ Ros-Lehtinen said before the House, citing examples and noting that Chinese agents were ‘persecuting American Falun Gong practitioners in our own country.’ And the well-documented ‘bloody harvest’ and ‘coercive organ transplants’ from Falun Gong practitioners within China, she added, ‘is almost too ghoulish to imagine.’

One prominent analyst on the issue of Falun Gong persecution, David Kilgour, is a former Canadian member of parliament and served as Canada’s secretary of state for Asia-Pacific in 2002 and 2003. He recently co-authored a book entitled ‘Bloody Harvest—The killing of Falun Gong for their organs,’ which closely examines the brutality and takes a look at the regime’s illegal persecution of exiled practitioners.

‘The espionage and intimidation the party-state deploys against Falun Gong abroad is outrageous,’ Kilgour says, calling it an extension of the ‘very severe persecution’ in China. ‘It’s unconscionable for a repressive government to use the freedom of a democracy to project abroad its persecution of its chosen victims.’

Among the examples he cites is a 2003 case in which two Chinese diplomatic officials in Edmonton were caught handing out pamphlets inciting hatred against the Falun Gong—a crime in Canada. But there’s much more, he says.

Chinese defectors have told Kilgour that the effort spent monitoring and repressing dissidents overseas actually outweighs all other functions of Chinese diplomatic missions combined, he says. Apparently the regime doesn’t want the international community to realize what has been perpetrated in China.

One victim of that persecution, author and human rights activist Jennifer Zeng, fled China in 2001 after being tortured at one of the regime’s ‘Re-Education-Through-Labour’ camps. ‘The PRC espionage and intimidation against FG practitioners overseas is so common that many of us have become accustomed to it,’ she says.

But while Falun Gong practitioners may be at the top of the regime’s list of perceived enemies, they are far from the only victims of anti-dissident Chinese operations abroad.

More at The Diplomat