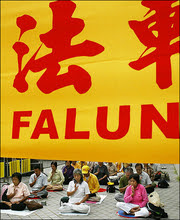 A lot of pressure is needed by FM Peter MacKay on his first trip to China, to get the Beijing bosses to release the 15 Falun Gong practitioners with ties to Canada and to stop the persecution altogether.

"The persecution of Falungong is a key policy of the Chinese regime among its many severe human rights violations," said Li Xun, president of the Falun Dafa Association of Canada.

"It is a serious issue that must be raised during any human rights talks with the regime."

China banned the spiritual group in 1999, accusing Falungong of spreading rumors in a bid to undermine "social stability" and Beijing's international relations, but the group is politically active in Canada.

The Canadian wing is expected to meet with the Foreign Affairs Department's China Desk on Wednesday to outline the plight of the 15, including the brother of a refugee who was himself freed from a Chinese prison with help from Canadian lawmakers, and the Beijing branch manager of Paris-based PCM Pumps.

The group accused Chinese authorities of "beating" and "brainwashing" their brethren, and sending them to forced labor camps.

Asylum seeker Yao Lian said PCM Pumps was "pressured to abandon their inquiries if they wished to continue doing business in China" after her husband Ma Jian was arrested at their Beijing offices.

"His arrest had a huge impact on their operations," she said, noting that French presidential candidate Segolene Royal wrote to Falun Dafa's Paris offices to "express concern" about Ma's fate, but failed to secure his release.

A Canadian government spokesman was not immediately available for comment.

But relations between Beijing and Ottawa have been strained recently over accusations that China is spying on Canadian corporations, the jailing of a Canadian imam in China, Canada's failure to deport a Chinese fugitive, talks between Ottawa and the Dalai Lama as well as stalled trade negotiations.

Last month, the wife of a Chinese diplomat defected to Canada and accused Beijing's embassy in Ottawa of inciting hatred against Falungong practitioners in Canada.