The Real Threat is China 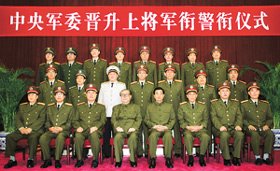 The Real Threat is China
by David Van Praagh

Ottawa Citizen, 16 Dec. 16, 2005 - Message for China: In Hong Kong, more than 100,000 Chinese went into the streets on Dec. 4 to demonstrate peacefully -- again -- for full democracy and freedom from the clutches of the dictators in Beijing. Credit: Vincent Yu, AP
As 2005 limps to an end, the biggest problem we face is not Iraq, but China. Defeating terrorism growing out of the Middle East will mean far less if the democracies fail to contain tyranny in Asia and the Pacific. The danger is that the free world is so torn-apart by the war on terror that it risks losing what has become an undeclared war with Chinese Communist dictators intent on global domination.

This is not the stuff of 15-second TV clips, at least not since the slaughter of students in Tiananmen Square by the tanks of the People's Liberation Army in 1989. This war has so many fronts that it's hard to connect them. One of them is Canada, and Prime Minister Paul Martin put Canadians on the wrong side -- I hope temporarily -- when he eagerly embraced China as a "strategic partner" last September.

But Mr. Martin joins other Western leaders who have bought the myths about China and the despots who have ruled the People's Republic since 1949. The names Pierre Elliott Trudeau, Jean Chretien, Richard M. Nixon and Bill Clinton spring to mind. Countless lesser apologists go back to those who called the Chinese Communists harmless "agrarian reformers."

Realists like Paul Martin Sr. must be at least twitching in their graves.

Four dramatic events this month, within days and a few hundred kilometers of each other, illustrate the China challenge.

In Hong Kong, more than 100,000 Chinese went into the streets to demonstrate peacefully, again for full democracy. And opponents of globalization from other countries protested -- again -- at a meeting of the World Trade Organization. But since the former British Crown colony became a "special autonomous region" of China in 1997, the dictators in Beijing have steadily chipped away at its guaranteed legal status.

At the same time -- and missed by the protesters -- they have used WTO membership to lubricate a massive flow of exports that keeps "market socialism" in business in China, undermines the economies of other countries large and small, and pays for a rapid buildup of conventional and nuclear weapons.

Meanwhile, the first East Asia summit happened in Kuala Lumpur, Malaysia -- with Canada and the United States deliberately not invited.

This was potentially a huge victory for China in largely realizing the unashamedly racist dream of former Malaysian prime minister Mahathir Mohamad: keeping the United States out of Asia and the Pacific, with Canada as the other North American power barred as an afterthought. But the United States is by far the most important economic and military player in Asia and the Pacific, and Canada is a major player.

And three powers that were invited made it clear to China that it will not have a free ride even in such a symbolic exercise. These are Japan and India-- major democracies and U.S. strategic allies determined to prevent Chinese domination of Asia -- and Australia, which has a clearer view of the region than Canada whatever its racial problems at home.

The mainland fishing village of Dongzhou, not far from Hong Kong, was the scene of the fourth event. In perhaps the worse massacre in China since Tiananmen Square, police and locally recruited thugs shot dead up to 30 poor Chinese for protesting the government's confiscating their land for a pittance in order to build a power plant.

Official land grabs, common in China, are one of the main causes of popular protests against the Communist regime, along with corruption of party cadres. Bureaucrats count and report the number of protests -- they say there were 74,000 in 2004. But we don't know what actually happens in the vast majority, including how many people have been killed.

Thousands of police isolated Dongzhou as soon as word of the massacre reached Hong Kong, even denying recovery of bodies to family members, and the authorities cut off all electronic channels of information.

These events underline what we have learned about the Communist dictatorship in Beijing headed by Hu Jintao: its fanatical rejection of democracy and human rights; its single-minded drive to acquire the resources -- including Canadian oil and high-tech -- necessary for economic supremacy; its clear determination to become a military superpower; its unrelenting campaign to dominate other Asian countries; and its systematic brutality to most of the 1.3 billion people of China except party members. More than 50 million Chinese have been killed by Communist rulers.

So why do myths about China persist? The main reason is profit.

Beijing's "market socialism" -- mixing of economic adventurism and political tyranny -- permits not only the Chinese leaders to profit from the world's biggest dictatorship but also countries standing up to China or vulnerable to China: the United States, Japan, India, Canada, Australia, the countries of Southeast Asia, even countries in Latin America, Africa and Central Asia.

One myth is that China will become democratic as its economy shoots up. But the Chinese dictators are tightening the screws, not loosening them.

Another myth is that China is not really Communist. If it were possible for the survivors of Dongzhou to speak out, they would surely say otherwise.

The most dangerous myth is that "Rising China" cannot be stopped in its drive to become the overlord of Asia and the Pacific and much more -- really the world domination that Mao Zedong wanted not so much for China or for Communists as for himself.

But China can be contained by one of two things, or perhaps both. One is an alliance for democracy among nations that understand political liberty and collective security must accompany economic prosperity. The other is the growing prospect of the dictators losing control of the people as China implodes under the increasing strains they are imposing.

Even with the war on terror likely to go on for many years, the war between China and the democracies -- still cold but it could become hot, quite possibly over Taiwan -- may be the most important conflict since the defeats of Nazi Germany and Stalinist Russia saved civilization.

Communist China poses a new kind of threat to human freedom, and both Western civilization and Asian civilization.

David Van Praagh, author of The Greater Game: India's Race with Destiny and China, is completing a book on the countries of Southeast Asia and China. A former Asia correspondent, he's a professor of journalism at Carleton University.