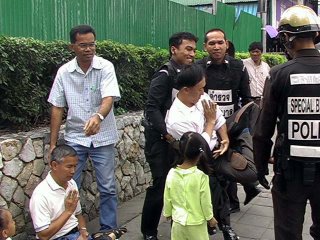 Thailand, 31 Dec. 2005 – UPDATE - Out of five adults and three children, aged 4, 6 and 14 who were forcibly arrested last December 15 by Thai police, five adults remain in custody at the Immigration Detention Center (IDC). The arrests happened after Falun Gong practitioners held a week of non-violent protest in front of the Chinese Embassy in Bangkok to condon the Hebei serial rape of practitioners by Chinese Police. All five of the refugees are under the protection of the United Nations Human Rights Commission (UNHCR), nevertheless two visas have been cancelled.

Multiple conversations with immigration and UN officials indicate that the arrests were a direct result of pressure from the Chinese Embassy. According to one official who asked to be left unnamed, the embassy called the Thai Foreign Ministry “every day” during the protests.

Four-year-old Huang Ying was released from the detention center to family friends on December 27, but is devastated that her father is behind bars. “Families should be together on New Year’s Day. Now I am forced to be separated from my parents. I miss them so much. I really hope all the Falun Gong children who are forcibly separated from their parents can be reunited with their families as soon as possible,” said 14-year-old Wang Anqi. Both her parents are detained at the IDC.

Wang’s parents had their Thai visas cancelled by immigration officials on December 21. They are appealing the decision, since the motivation for the arrests was due to pressure from the Chinese Embassy. The protestors were acting within the boundaries of international human rights laws, and according to conversations with members of the National Human Rights Commission of Thailand, within the scope of the freedoms accorded by the Thai constitution.

Since these unlawful arrests, overseas Falun Gong practitioners and other supporters have been appealing at Thai embassies and consulates to have the detainees released immediately. One banner read, “Thailand, please do not forsake your sovereignty for communist tyranny.”

A complaint to the UN Human Rights Commission was filed on December 18 by the Falun Gong Human Rights Working Group detailing the incident and recounting past repeated harassment of practitioners by the Thai government under pressure from the Chinese Communist regime.

“I miss my wife and my daughter misses her mom. I do not want to see another tragedy happen. I hope that the Thai authorities can make the right decision and release all the Falun Gong refugees unconditionally,” said Hua Feng, whose wife is detained at the IDC.

Thai nationals will continue to protest these unlawful arrests and the CPP gross human rights violations against Falun Gong in front of the Chinese Embassy in Bangkok.
Posted by MaKina at 4:46 PM