Darfur, peace, and weapons from China

Part of this speech was delivered at the Peace Walk for Darfur in Vancouver on Saturday July 22, 2006. What we are hoping to achieve is for ‘never again’ to mean something. The chair of Students for Darfur recently joined the Coalition to investigate the Persecution of Falun Gong.

It’s good to see so many people here today, united for the same peaceful goal of raising awareness to stop the genocide in Darfur. This tragedy is not only grotesque but it is an insult to humankind. Hundreds of thousands of lives have been lost but how many can be saved?

One might ponder if we really meant it when we said ‘never again’… or has it just become a shallow refrain? Our governments have the power to stop this genocide and a few others, and they should take action to stop injustice, genocide, and crimes that threaten world peace, and these actions in turn will bring honour and prosperity to Canada.

We ask: what is China’s role in the Darfur genocide? Although some people see China as a friendly giant, many others see it as a red terror. The new report from Amnesty International titled “China: Secretive arms exports stoking conflict and repression” sheds some light on the matter and gives us plenty of reasons to worry about the China threat. In fact, Amnesty International branded the Chinese Communist Party as the ''most irresponsible'' for supplying weapons of mass destruction to ''rogue'' countries such as Sudan, North Korea, Iran, Zimbabwe, and the former Taliban in Afghanistan. 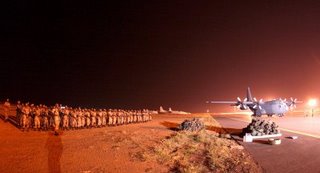 In Sudan’s Darfur those weapons were used to back up the militias where over 300,000 people were killed and 2.5 million driven away from their homes. In so doing Communist China has shown the world how far it is willing to go for a few more barrels of oil. When it comes to China, the good old days of trading with a conscience seem to be few and far between and this attitude has rubbed off on the free world. While I call the Chinese dictators merchants of death, the report refers to a "dangerously permissive approach"—an approach that translates into a killing spree that has gone unchecked for decades.

Last year the US Council on Foreign Relations eloquently stated that: “China has successfully prevented the United Nations Security Council from serious sanctions or other preventive measures in the face of alleged genocide and crimes against humanity perpetrated in the Darfur region.”

We agree with Amnesty’s recommendation that all the world's nations should join an arms trade treaty encompassing the principles of international humanitarian law.

We have many expectations when it comes to world peace. But first, I would like to talk briefly about another genocide occurring now in this world--the persecution of Falun Gong in China. For seven years Falun Gong practitioners have been branded as criminals, tortured and killed simply for what they believe in. The Chinese Communist Party uses over a hundred different torture methods on the practitioners to force them to renounce their belief.

Recently it has come to light that there is a practice of large scale organ harvesting of Falun Gong practitioners taking place in China. This has been verified in a report by former Member of Parliament David Kilgour and international human rights lawyer David Matas who conducted their own indepedent investigation.

Falun Gong practitioners, organs are extracted while they are still alive and sold to the highest bidder. They take the heart, both kidneys, the corneas, the liver, and when there are no organs left to take the bodies are thrown in the crematory to destroy all the evidence. Fresh organs are advertised on websites, and foreigners travel great distances for a transplant.

The report notes that the Chinese regime’s “policy of repression (of Falun Gong), means that they are in prison without rights, at the disposition of corrupt authorities. The incitement to hatred against the Falun Gong and their dehumanization means that they can be butchered and killed without qualms by those who buy into this official hate propaganda.”

These crimes against humanity are a blatant attack on the moral conscience of all human beings. It is clear that we must stand together more than ever and protect our fellow world citizens at the hands of brutal dictatorships and corrupt governments. There truly is no other choice we can make as human beings.

These genocides, be it in Darfur, China, or elsewhere on the planet, can no longer be ignored and underestimated. The campaigns of terror must be stopped. If the UN can help—they should help now! People’s lives are at stake.

In solidarity with the people of Darfur, we appeal to all kind-hearted people here today, to persevere in defending the universal principle of human rights. We must seize the moment and not lose sight of the glimmer of hope for peace--because peace is on its way!

Thank you and Heishi!

China's Support of Genocide in Sudan