Standing to a 'united front' for the 2008 Beijing Olympics

UPDATE: As the 2008 Beijing Olympics are fast approaching with all venues ready by 2006(?), one can't help wonder if the Chinese Communist Party (CCP) will take advantage of the Olympics to set Taiwan straight? Hmm... But it's not only the Taiwanese that are concerned about this growing threat. With a pattern of using international events to silence dissidents, last year the dictators from Beijing vowed to stamp out the Falun Gong before the Games. The recent news of mass-scale organ harvesting from living Falun Gong practitioners show that the slaughtering is well underway with tens of thousands gone missing. The FGHRWG notes: “The Olympic spirit is to embody courage and nobility, calling the Olympic flame a "sacred fire" passed on to humans by the gods. The PRC's communist regime has tainted this spirit by torturing Falun Gong practitioners to do hard labor for the Olympic Games.” And a few other things...

A 2002 report by AFP serves as a reminder of the sad reality: The groups, the Committee for Investigation on Persecution of Religion in China and the Free China Movement, released what they said was a report from authorities in Jilin province calling for a crackdown on all dissident groups, particularly the banned Falungong spiritual movement, "in order to host a better and successful Olympics in 2008." The report called for organisers of demonstrations to be swiftly arrested and "punished severely", sanctions of up to three years in custody and fines of 10,000 yuan (1,200 dollars) for offenders and for Falun Gong activists to be particularly harshly dealt with. (read more)

Meanwhile a recent report from See Magazine offers a ray of hope--Kilgour, (co-author of the report verifying allegations of organ seizures from unwilling Falun Gong in China) is in Europe this week and next presenting his report to parliamentarians in Brussels, London, and Germany to drum up international support. He hopes China will listen to international criticism because it is preparing for the 2008 summer Olympics.

"What we’re hoping is that we can make it clear, all of us to the government of China, that if they don’t stop this immediately, we’re all going to reassess our position on the games," Kilgour says.

"Maybe they’ll realize that at least until the games are over, they should stop [organ harvesting]. Maybe they won’t. Maybe they’ll continue to think we’re so stupid, and so venal, and so whatever in the west that we’ll put up with anything."

As the CCP’s irrationality and evil nature emerge more and more, I am hopeful that justice and peace will prevail. At this crucial time in history, it is simply inconceivable for the western governments not to recognize sooner or later that the CCP is using the Olymics as a tool to justify its crackdown on Falun Gong and all other forms of persecution occurring in China today and outside China. It is high time the world's nations sober up and take affirmative action--rewarding cruel dictators with honours is a blatant insult to humanity. This geopolitical move on the part of the IOC indirectly contributes to the loss of countless lives through a string of genocidal campaigns conducted by the CCP. This has brought shame to humankind. And that's not all--besides puffing up the CCP's ego, the OIC's decision (of awarding the Games to China) has acted as a catalyst for allowing the red terror to unleash his dogs of war through supplying WMD to rogue countries, committing state terrorism under the guise of maintaining stability, and threatening Taiwan with 800 missiles. How can we ever mend this part of our history?

If you are as concerned as I am about these atrocities you can go here and here to say no to the Olympics. 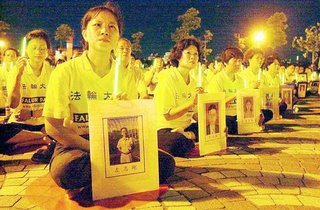 Standing up to a `united front' for the Games

A recent report from SMH suggests that tension could even reach a new high in Beijing with the re-entry of Jiang Zemin in politics. "A central theme in his (Jiang Zemin) letters and speeches to the People's Liberation Army is the need to prepare to fight Taiwanese independence.

"The Taiwan issue has been my biggest worry. Now and in the coming period of time, the largest and most real threat to our national security is Taiwan's pro-independence separatist forces," he said in his final speech to the army's leadership in September 2004." (more)

Taipei Times: Saturday, Jul 22, 2006 -By Tsai Cheng-chung The 2006 FIFA World Cup having come to a close, the 2008 Summer Olympic Games in Beijing will be the next global event to take center stage.

When dealing with international athletic competitions, the Cabinet must establish a rapid response unit spanning the Chinese Taipei Olympic Committee, the Ministry of Foreign Affairs and the Mainland Affairs Council.

I have a number of observations to make about how China is going to take advantage of its hosting of the Olympics to prevent Taiwan from asserting its sovereignty.

First, since Hong Kong's reversion to China in 1997, Beijing has strengthened its "united front" strategy against Taiwan.

Take Chinese television for example: China's State Administration of Radio, Film and Television has ordered that "Taiwan, China" be displayed when the names of Taiwanese actors or actresses are displayed on Taiwanese TV shows broadcast in China.

In addition, in 2003, China's Ministry of Public Security also started granting Taiwanese citizens Chinese identification cards and passports in an attempt to negate the legitimacy of documents issued by the Taiwanese government.

Second, the Chinese media present only very negative coverage of the democratization of Taiwan, branding demonstrations aimed at protecting Taiwan's democracy as a beast endangering social stability and the nation's prosperity.

In this regard, Beijing is not selective about the targets of its mockery, lashing out at both the pan-green and pan-blue camps, the president and borough chiefs, and using defamation and satire to mislead the Chinese people while ignoring their aspirations to democracy and human rights.

Taiwan's temporary economic slump following its economic transformation over the past few years is described as a sign that Taiwan's growing economic reliance on China is unavoidable, that blood is thicker than water and that any anti-China/pro-Taiwan sentiment is doomed.

Third, "Chinese Taipei" is the name that Taiwan has used in past olympic games. To speed up the annexation of Taiwan and unify the ideological education of its people, China has for many years used the epithet "the team from Taipei, China" in sports broadcasts and even included Taiwanese gold medals in the national total medal count for China.

When Taiwan's Olympic team enters the stadium during the 2008 Olympic Games, Chinese sports reporters will call Taiwan's Olympic delegation "the team from Taipei, China" or declare that Taiwan is part of China. How should Taiwan respond to a situation like this?

Fourth, 2008 will be an eventful year. In March, prior to the Olympic Games in Beijing in July, Taiwan will hold its next presidential election, and the new president will take office in May.

When the Chinese Nationalist Party (KMT) was in power, Taiwan's representative to the General Agreement on Tariffs and Trade (GATT) Shirley Kuo took action to show China that Taiwan was not merely a local government of China.

If "Chinese Taipei" is described as the "team from Taipei, China" at the 2008 Olympic Games, I hope that Taiwanese people and the media will not equate "Taiwan, China" with "the Republic of China on Taiwan."

Related Articles and links to this post: here and here

Take your Olympic torch and snuff it

Olympics and Human Rights: Beijing in 2008

NRO: Beijing 2008 - The Olympics in the belly of the beast