July 20, 2006 marks seven years since the brutal persecution of Falun Gong began in China in 1999. For seven long years, Falun Gong practitioners in China have been branded as criminals, tortured and killed simply for what they believe in. The communist authorities use over a hundred different torture methods on the Falun Gong in an effort to force practitioners to renounce their belief.

But large-scale organ harvesting is the most sinister and shocking aspect of the persecution today. The organs are extracted while the practitioners are still alive and are sold to the highest bidder. They take the heart, both kidneys, then the liver...their bodies are then thrown into incinerators. Mr. Matas, co-author of the Kilgour-Matas Report on organ harvesting, calls this practice: 'a new form of evil'. All of this amounts to an estimated 50,000 deaths by torture with tens of thousands still missing after being detained by authorities. 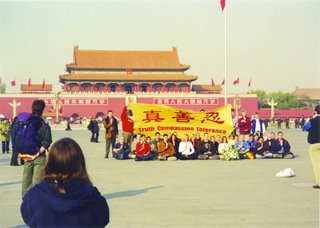 Here in Canada, the Chinese communist regime (CCP) pressures and manipulates our government officials on all three levels to remain silent about the persecution or face trade loss with China. It seems that the Chinese regime is very confident that no one has the guts to contest them. This deafening silence has helped to build up a suitable environment for these atrocities to exist. By any means, governments should not indulge dictatorships in carrying out their brutal repressive regime via the embassies and consulates of the world.

Private corporations are, too, turning their backs on these atrocities. One example is Rogers Cable. CRTC is presently looking at licensing 9 Communist controlled TV channels to Canada sponsored by Rogers. These channels are used to perpetuate hatred against Falun Gong fueling the persecution in China. One can only hope that the companies doing business with the Chinese regime will soon wake up and voice their concerns over the CCP's human rights abuse and make it known that Canadians do not trade human values for big bucks.

The true nature of the Chinese communist Party (CCP) has been revealed again--a dangerous and corrupt regime that poses a threat to humankind. These crimes against humanity are a blatant attack on the moral conscience of all human beings. It is clear that we must stand together more than ever and protect our fellow world citizens at the hands of brutal dictatorships. There truly is no other choice we can make as human beings.

Canada: Conservative Caucus Chair Condemns the "New Form of Evil," Calls upon the International Community to Exert Pressure on the CCP

Kilgour and Matas Respond to Chinese Government
Timeline of Event: Kilgour-Matas Report Confirms Organ Harvesting in China
Toronto Sun: A man of principles Silence in the face of evil is not David Kilgour's way. Sadly there are few like him in seats of power
Posted by MaKina at 8:57 PM

I am a meditator. I live in sweden. Wonder if they would harvest my organs if i moved to china. But i guess many of my organs are not good enough. interesting blog you have. keep spreading the truth.