Update: China e-Lobby reports (Aug. 18, 2006): The Singapore regime came up with an alternative to jailing Chen Pei Yu for the crime of - I kid you not - "harassment by displaying insulting writings" (Today Online); it will send her back to Communist China instead.

It's not hard to figure out that she will be likely tortured, and might even become and unwilling organ donor. What were they thinking?

My 28 Days in a Singapore Jail

UPDATE: "If history were to repeat itself, would Sophie Scholl be arrested in Singapore by the police for distributing leaflets to expose the Nazi's atrocities? Would she also be given a court sentence for possession of unsanctioned material?"

During the Nazi reign, a famous professor at the University of Munich and some students under the code name "White Rose" distributed large quantities of home-made fliers to directly expose Hitler's war crimes and inevitable defeat. Brother and sister Hans and Sophie Scholl were both members of the "White Rose". On the 18th February 1943, they were arrested while distributing leaflets in the University of Munich. Four days later they were sentenced to death by the Nazi Court in the so-called "name of the people" and executed on the same day. Two years later the fliers they made were air-dropped in the millions to Germany by the allied forces. The Third Reich under Hitler's reign crumbled in a matter of a few months. The "White Rose" and the Scholl siblings became synonymous for righteousness and conscience in the face of abusive power in German history. The movie, "Sophie Scholl - The Last Days" won the Best Movie award at this year's Berlin Film Festival.

"While every country in the world is calling for the public's courage and conscience to take on social responsibilities, the Singapore regime has made an unfair judgment against Falun Gong practitioners who are courageously devoting themselves to human rights and world peace. What we hope to understand is how much social justice Singapore legislation can still represent? In Singapore, do the laws still serve the purposes of protecting human rights? Or have they been reduced to tools of dictatorship? Who benefits from the Singapore court's unfair judgment against the Falun Gong practitioners?" (read more)

Below is the latest on the CCP’s import of the persecution of Falun Gong to Singapore. Here’s some background: the former head of 610 office, Li Lanqing, visited Singapore on July 6th. Meanwhile the Singapore police dug out some old incidents to sue the practitioners again. The local newspapers reported this harassment very negatively and gave Falun Gong a bad name. CCP’s Xinhua News carried an article on this and the Singapore Lianhe Zaobao reported that Ms. Huang Caihua was arrested in front of Chinese Embassy for ‘illegal assembly’ a few days ago. However, she was the only practitioner there that morning. She was told that she violated ‘Miscellaneous Act’. Singapore has a long history of harassisng Falun Gong... 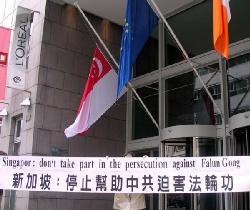 I encourage everyone to fax, email, and call the Singapore authorities as nine practitioners have been summoned to go to court this Friday, the 21st. You can use the following letter as a sample and the contact information is at the end. Many thanks for the ongoing support!

Re: URGENT – Drop the charges against Falun Gong Practitioners

It was brought to my attention today that the Singapore police brought nine Falun Gong practitioners to court on July 14th, 2006 because of small incidents that happened over nine months ago. Apparently Falun Gong practitioners distributed flyers on the street on October 22 and 23, 2005. As the practitioners spread out many police officers video taped them and later on they were charged with “illegal assembly”. For this the Falun Gong will go to court again on July 21st, 2006 and might be facing up to 3 months in jail and/or $5000 fine.

I would say there appears to be an injustice here and it looks like the Falun Gong were framed. Let me explain. When high ranking officials are visiting from China, for example Li Lanqing's recent visit, it is likely that orders from the top have to be executed in such a way that Falun Gong are punished even though they are well within their right to hold a peaceful protest.

It is clear that the Chinese Communist Party (CCP) officials need to be reminded that they cannot bring their brutal persecution with them when they travel outside of their country. Likewise, Singapore authorities should not fall into their trap and harass innocent people just because Beijing said so either. You need to understand that for the most part the Falun Gong did not do anything wrong according to Singapore's rule of law, therefore, this matter should be settled quickly out of court.

It is unfortunate that the Chinese Communist Party (CCP), who have been persecuting the Falun Gong for their belief for seven long years, will not hesitate to import their mean evil ways into any country. It is no surprise that Hu Jintao tried to persuade President Bush to ban Falun Gong in the US last time he was visiting there. Recently pressure (from Beijing) has been exerted in Hong Kong as well to outlaw the practice. And according to the Kilgour-Matas report released July 6, allegations of illegal organ harvesting from living Falun Gong in China were confirmed to be true. This new form of evil shows how far the CCP has gone to murder these people for profit. It would be of great benefit to you and your staff to know more about the true nature of the CCP. The Nine Commentaries on the Communist Party reveals the uncensored shocking history of the Chinese Communist Party (CCP) and can be found here.

Needless to say that Singapore will certainly be the target of very bad publicity if it chooses to go ahead with prosecuting the peaceful Falun Gong who are well respected throughout the world. It is high time for Singapore to uphold justice and integrity instead of kowtowing to China at the peril of its own residents/citizens.

Freedom of religion is for everyone and the free world should respect those values even more. For the greater good of all humankind, we should not indulge dictatorships in carrying out their brutal repression via the embassies and consulates of the world. Singapore should show some integrity here and leave the Falun Gong alone. They have suffered enough at the hands of the CCP, the least you could do is give them the rights to exercise their rights in Singapore.