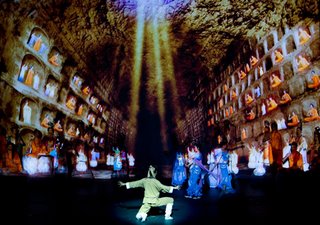 Lloyd Dykk, Vancouver Sun: According to the Chinese calendar it is the Year of the Pig coming up, which signifies good fortune, kindness, honesty and tolerance. And you may want to feast on the entertainment of the second annual Chinese New Year Spectacular when it comes to the Queen Elizabeth Theatre for two shows Wednesday.

It sounds like the sort of extravaganza you'd normally see just a few blocks away at the Centre for Performing Arts in Vancouver: A celebration of what's known as China's golden age, the Tang Dynasty, a remarkable time in China's 5,000-year history.

The three-century-long Tang, with present-day Xi'an as its then most populous city in the world, reached a high point of cosmopolitan culture and prosperity, largely the result of military exploits. From this show, purportedly based on the Tang, you can expect epic tales, dragons, drummers and beautiful dances from about 100 young performers in all, most of them overseas Chinese who live in New York. But it might be a good idea to try to see the Tang through a 21st-century filter.

In its four years of existence the show seems to have been a success, growing from appearances in five cities at its beginning to this year's 28 cities across four continents, a run that will total 67 performances. (In Canada it goes to Ottawa, Montreal and Toronto after the Vancouver appearance.)

It's put together in New York in a production by New Tang Dynasty Television, based in New York. It was ranked No. 7 in Billboard magazine's top 10 shows in 2006, based on shows that ran last year at New York's Radio City Music Hall.

Vancouver's Patrick Dong, 43, is the local promoter and coordinator of the show for its Vancouver appearance, as he was last year. He worked for NTDTV in East Asia from 2002 and moved to Canada in 2004. He is the managing director of NTDTV in Vancouver. This is an independent, nonprofit Chinese language TV broadcaster established by overseas Chinese which began broadcasting via satellite in North America in 2002, extending its 24/7 programming to cover Asia, Europe, and Australia in 2003.

Asked to describe the show, Dong says: "It tries to represent what is the real essence of 5,000-year Chinese culture, which is also our goal.

"Actually, Vancouver's show will feature productions from many dynasties, like Mulan, the famous girl warrior, of the Ming Dynasty, and the loyal soul Yu Fei of the Song Dynasty. We pride ourselves in authentic costuming styles, music and dance movements to reflect the culture as true to history as possible."

It's proven popular, he says. "There was only one show last year in Vancouver as opposed to the two this year. Ninety per cent of the feedback based on our on-the-spot survey was excellent. More than 2,500 saw the show and 60% of them were non-Chinese."

He describes the grace, dignity and beauty of the show as "stunningly captivating."