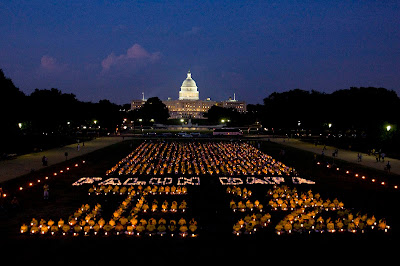 On July 16, 1500 Falun Gong practitioners held a candle light vigil in front of the Washington Monument in memory of those tortured to death during 10 years of persecution

In its annual report, the commission listed China among the worst violators of religious freedom, saying the government imposes severe restrictions on unregistered religious groups and those deemed to threaten national security or social harmony.

"Religious freedom conditions for Tibetan Buddhists and Uighur Muslims remain particularly acute as the government broadened its efforts to discredit and imprison religious leaders, control the selection of clergy, ban religious gatherings, and control the distribution of religious literature by members of these groups," the report said.

The report also said that over the past year, the government has detained over 500 unregistered Protestants and dozens of Catholic clergy, increased efforts to destroy or close unregistered churches and meeting places, and targeted followers of the banned Falun Gong spiritual movement and their defenders.