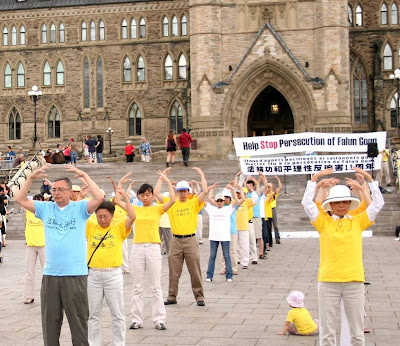 OTTAWA — The Human Rights Tribunal of Ontario has awarded $15,000 to a woman who was expelled from the Ottawa Chinese Seniors Association because she is a practitioner of Falun Gong.

The tribunal says Falun Gong is a “creed” under the Ontario Human Rights Code, and excluding a person for following it is discrimination.

Human rights lawyer David Matas, who represented Daiming Huang, 78, called the decision a “push-back by the Canadian system” against persecution of Falun Gong by the Chinese government, and organizations that cooperate with it in Canada and other countries.

“I consider this a judgment of global significance,” he said. “It’s an assertion of Canadian human rights values against Chinese Communist Party oppressive values.”

The judgment doesn’t bind any organization outside Ontario, he noted. But he said it has “persuasive force” for human-rights authorities in other jurisdictions.

He said it’s also of value for people who have no connection with Falun Gong or the Chinese government.

“Human rights violations are a spreading stain. You can’t contain them in one group,” he said.

The decision was based both on Daiming Huang’s expulsion, and on comments made by leaders of the seniors’ group about her and Falun Gong.