Bar Entry to China's Chen Zhili for Crimes Against Humanity 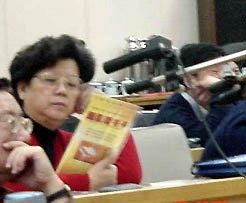 
VANCOUVER (FDI) 5 Feb. 2006 – The Falun Dafa Association of Canada has requested that the Canadian government deny entry to the former Chinese Minister of Education, Chen Zhili, for her role in committing crimes against humanity in the persecution of Falun Gong.

Chen Zhili is expected to arrive in Vancouver on Tuesday, February 7th.

Between 1999 and 2003, while serving as Minister of Education, Chen Zhili launched a Cultural Revolution-style campaign throughout China’s education system ordering teachers and students to undergo “political shaping of thoughts” with respect to Falun Gong. Amidst the campaign, teachers and students who practiced Falun Gong were sent to brainwashing centers where they underwent psychological and physical torture.

As of Jan. 29, 2006, 150 teachers and students have been tortured to death for their belief in Falun Gong, many of them as a direct result of Chen’s policies. Several Canadian residents are among those who were tortured and persecuted under orders from China’s Ministry of Education at the time when Chen oversaw it.

Matas has requested that the relevant Canadian agencies deny Chen Zhili a visa to enter Canada and bar her from landing on Canadian soil in accordance with the Canadian Crimes Against Humanity and War Crimes Program.


If Chen is allowed to enter Canada, the Falun Dafa Association will take legal action against her for her role in the persecution of Falun Gong.

Related Article:
How China’s Propaganda Machine Tries to Fool the World
Posted by MaKina at 7:40 PM