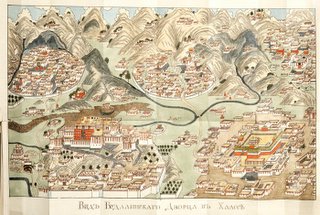 KATHMANDU (RFA) 01 Feb. 2006 - Authorities in the southwestern Chinese province of Sichuan have released one of six Tibetan nomads held in connection with the burning of a Chinese-owned slaughterhouse, after prison beatings and an untreated infection left the man blind, Tibetan sources said.

“Six who were suspected as the main culprits were arrested and jailed. One of the six was released since he lost both his eyes [after] beatings by Chinese prison officials and a severe infection,” one source told RFA’s Tibetan service.

More than 160 Tibetans were detained after hundreds of people stormed and set fire to a Chinese-owned slaughterhouse on Aug. 5, 2005, in Manikengo (in Chinese, Manigange) township in Kardze (Ganzi) Tibetan Autonomous Prefecture in what is now Sichuan, sources said.

Scores of police and security forces rushed to the slaughterhouse, built in 2004 by a Chinese entrepreneur and his partner, a county official, the said.

Only Sogya was released after he became blind as a result of beatings and an untreated infection, acording to several sources.

Government officials declined to comment on the case or the fire, and whether any of the six have been officially charged, tried, or sentenced was unknown.

The crowd that converged on the building last August appears to have been especially large because the incident occurred during the annual Tibetan horse race festival, which attracts thousands of people, the sources said.

The Tibetans, some of whom said they were angry because they had been pressured to sell their animals for slaughter at below-market prices, broke into the building and found what they described as a large number of animals, including dogs and horses, the sources said.

They freed all the animals and set fire to the building, sources said. Whether the building was completely razed or badly damaged was unclear.

Accounts of the incident offer a rare glimpse of tensions between ethnic Tibetans and Chinese authorities in this remote and undeveloped region, under the administration of Sichuan province since 1949.

Friction over the existence of the slaughterhouse is said to have been escalating for more than a year, with monastic leaders trying to buy the property and the Chinese owners refusing to sell it. At one stage in 2004, local residents said, the Tibetan community organized a boycott of the slaughterhouse.

“The local Tibetans didn’t like the idea of huge slaughterhouse in Dege county, [and] it had no business last year. Neighboring Pawon [in Chinese, Babeng] township planned to sell them about 300 yaks, but the local nomads of Manikengo objected and the proposal was withdrawn.”

Kalsang Rinpoche, reincarnate lama of Dzogchen Monastery, and Khenpo Sherab Sangpo, abbot of Golok Serta Buddhist Center, together offered to buy the slaughterhouse for 100,000 yuan, one source said, but the owners refused to sell.

RFA reporters were unable to locate the owners of the slaughterhouse for comment.