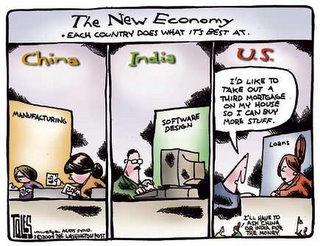 If China is Asia's hare, India is its tortoise in race that may surprise

HONG KONG (Standard) 01 Feb. 2006 - If you want to shock an audience of business people, make this argument: Twenty years from now, India's rise will be more impressive than China's.

The conventional wisdom is that efficient and rigidly controlled China will leave unsteady, plodding India in the dust. That certainly was the buzz at last week's World Economic Forum in Davos, Switzerland.

Two decades from now, a very different outcome may befall Asia's two nascent superpowers - one that investors should consider carefully.

For an indication why, check out downtown Chennai. The southern city of 4.2 million is India's fourth largest and, like Mumbai and New Delhi, it is experiencing a retailing boom.

Chennai's proliferating malls are abuzz with fashionably dressed 20somethings showing off their growing affluence. They're sipping pricey espressos, buying Italian handbags and text-messaging each other on hyper-modern cellular phones.

It's scenes like these that have economists such as Stephen Roach at Morgan Stanley saying: "India is on the cusp of something big." As a share of gross domestic product, its burgeoning consumer sector is outpacing China, Europe and Japan. Economists are also noticing that India's economy is looking less like those in East Asia and more like those in the West.

True, even the most superficial look at Asia's second- and fourth-biggest economies - China and India, respectively - argues in China's favor. Its world-class infrastructure, glistening skyscrapers, massive supply of cheap labor and ability to direct huge resources anywhere they're needed make it a limber hare.

India is Asia's tortoise, plodding along as China races off with a leading chunk of the world's direct foreign investment. Its infrastructure is an embarrassment, its bureaucracy a major economic headwind and its crushing poverty a reminder of challenges facing the world's second-most populous nation.

Here, the Aesop fable about the tortoise and the hare may offer some insight. In it, the hare, the clear favorite in the race, shoots ahead only to lose steam before the finish line. The less athletic, but steadily progressing tortoise wins in the end.

But for all its warts, India boasts a level of ground-up entrepreneurship China's top-down model can't match. It's created world-class, globally competitive companies and a real stock market, unlike the financial casinos that pass for equity bourses in China. India also has a liquid bond market and its banking system isn't bogged down by bad loans.

Education policies, an ever- increasing pool of English speakers, demographic trends and political stability also are strengths. Democracy can be an inefficient, messy process and nowhere is that truer than in India.

Yet it is civil society, a free press and accountable government that offer stability. China's transition from a command economy to capitalism poses many risks, including social instability.

So seduced are investors and executives by what could go right in China, they often forget all that could go wrong, too.

Here are three reasons to wonder if China has the stuff to remain ahead of India by the year 2026.

The first is entrepreneurship. For all the stories about China churning out millions of engineers and scientists, innovation is not at the heart of an economy that grew 9.9 percent last year. Foreign investment and massive government spending drive China's boom.

India isn't exactly running on a single engine. Its economy is growing at an 8 percent rate with far less domestic and foreign investment than China. Simply put, it has done a more impressive job of creating a living, breathing economy.

The second big issue for China is piracy. While India has its challenges, it does a far better job of protecting intellectual property rights.

China must create technologies and products no one has thought of before. Its future as an innovative powerhouse - and its ability to create millions of new jobs as a result - depends on protecting the ownership of those advances. If Chinese innovators can't profit from their ideas because their fellow countrymen steal them, why should they bother?

Third, China's rise itself. Nothing has provided a more abrupt wakeup call to India than China's emergence as a global economic power. That may just be the catalyst needed to shake India out of its lethargy and kick the economy into higher gear.

If it can, India may prove true something else that Aesop wrote long ago: "Men often applaud an imitation and hiss the real thing."

Related Articles:
China e-Lobby: Communist China and India: They are not the same