Will Canada ever consent to prosecute Falun Gong's torturers? 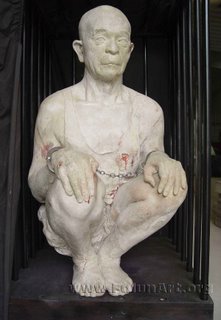 This is not the outcome we were hoping for... It is a big disappointment and a big loss for Communist China. Jiang Zemin and Luo Gan are the architects of the persecution of Falun Gong--by all means they should be punished by law. Read a news report by the WSun.

My Letter to the Editor:

I am appalled at the judge's decision. As if it wasn't enough for Zhang to go through the horrific torture by the CCP, because he wouldn't give up his belief in Falun Gong, now he is refuted the right to take his torturers to court! Somehow I fail to see the legitimacy of our judicial system. The architects of the seven-year persecution are allowed to run away scot-free. The evidence of the persecution has been well documented by many human rights organizations worldwide with countless testimonies from victims of this vicious persecution. And with the recent news of the organ-harvesting death camps in China, set up especially to eliminate thousands of Falun Gong for a profit, I can only say that this all contributes in amplifying this persecution greatly. I sure hope our new government can start weighing the circumstances and soon enlighten to the voice of justice. This genocide must be stopped and the perpertrators must be brought to justice.
###

Winnipeg Sun: 15 Feb, 2006 -The outcome of a federal court hearing in Winnipeg will determine if 45 individuals in China will face prosecution for allegedly torturing and detaining a Canadian professor in 2000.

Kunlun Zhang, a Chinese-born Canadian citizen, was given electric shocks, had an electric baton shoved in his mouth and was beaten repeatedly while held in Chinese detention centres and labour camps for practising Falun Gong, says his lawyer David Matas.

Falun Gong is a spiritual practice outlawed as a dangerous cult in China.

"The problem of the torture of the Falun Gong in China is chronic, endemic, systematic, widespread and continuing. People in Canada have to do something about it," said Matas, who was in a Winnipeg courtroom yesterday on Zhang's behalf.

Matas is hoping the judge will reverse a 2005 decision by Canada's attorney-general that denied Zhang's request for a private prosecution against his torturers. That would clear the way for the Canadian government to attempt to begin extradition proceedings with China to bring the 45 people named in Zhang's suit to Canada for prosecution.

The judge reserved her decision.

"We need to get some deterrence to torture in China and this is one way to do it. It sends out a signal that there are consequences for torture," said Matas.

The human rights lawyer believes the federal government has a duty to consent to prosecution against those who torture and illegally detain Canadian citizens.

"We can't simply say, well it happened and we're not going to do anything about it," said Matas, noting the Canadian government did play a role in freeing Zhang in 2001 from the grasp of his Chinese persecutors.

Zhang is a Canadian university professor who now lives in Ottawa.

While in China in 2000 and 2001, Zhang was arrested four times and spent nearly three months in Chinese detention centres for practicing Falun Gong.

Practitioners of Falun Gong are persecuted by the Chinese Communist Party until their beliefs are renounced.

The Chinese spiritual discipline includes exercise, meditation and the pursuit of truth, compassion and tolerance.

Falun Gong was introduced to the public in China in 1992 and quickly drew widespread attention.

The Communist regime began its campaign to eradicate the practice and persecute practitioners in 1999.