Rally to Support 8 Million Resignations from the CCP 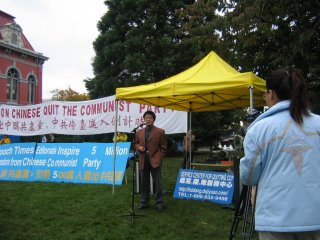 Photo: Guo Guoting was guest speaker at a recent rally in Victoria, BC

A wave of resignations from the Chinese Communist Party (CCP) was triggered by the release of an editorial series called the "Nine Commentaries on the Communist Party” a year ago. For the first time, the Chinese people have access to an uncensored history of the CCP and an opportunity to re-think their fate and China’s future. They can now look squarely into the history of CCP, and at the deaths of 80 million Chinese Nationals since the Party gained power in 1949. Its use of brutal repression is well known today.

The speed at which the resignations have occurred across all levels of society indicate that this phenomenon represents a profound awakening for the Chinese people. Therefore many observers have suggested that the last fortress of Communism is quietly collapsing. We believe this moment will be compared in history to the time just before the fall of the Berlin Wall. The pictorial display will show the various campaigns of genocide headed by the CCP over the last half century up to the present-day persecution of Falun Gong.

In the wave of ‘quitting the CCP’ movement, Mr. Gao Zhisheng, famous human rights lawyer also know as the Martin Luther King of China, launched a relay hunger strike in Mainland China on February 7 which has quickly spread overseas. Guo Guoting, a Shanghai rights lawyer now residing on Vancouver Island and guest speaker, will be starting a hunger strike on the 19th to protest the persecution and crimes of terror committed by the CCP. Support from local Dajiyan/Epoch Times employees and volunteers is also extended to Dr. Li Yuan, Technical Specialist for Dajiyuan/Epoch Times, who was brutally assaulted and robbed last week in his Atlanta home presumably by CCP Agents. If China is to progress towards a bright future these acts of terrorism must be stopped--everyone who is concerned about Communist China is warmly welcome to join in the rally.

“It is easier to alter rivers and mountains than to change one's nature.” In comparison with China’s 5000-year history, the 55 years of the CCP’s rule are but the blink of an eye.

History has proven that every time the CCP loosens its bondage and chains, it does so without intending to abandon them. After the Great Famine of the early 1960s, the CCP adopted the “Three-Freedom and One-Contract” (San Zi Yi Bao) program aimed at restoring agricultural production, but without the intent to change the “slave” status of Chinese peasants.

The “economic reform” and “liberalization” in the 1980s had no constraint on the CCP’s raising a butcher’s knife to its own people in 1989. In the future, the CCP will continue to alter its façade but will not change its iniquitous nature.

Some people may think that the past belongs to the past, the situation has changed, and the CCP now is not the CCP of an earlier era. Some may be satisfied with false appearances and even mistakenly believe that the CCP has improved, is in the process of reforming, or intends to make amends. They may constantly push away troublesome memories of the past. All these can only give the CCP’s band of villains the opportunity to continue to survive and threaten humankind.

All the efforts by the CCP are designed to make people forget the past. All of the people’s struggles are a reminder of the injustices they have suffered at the hands of the CCP.

In fact, the history of the CCP is one that has severed people’s memories, a history in which children do not know the true experiences of their parents, a history in which hundreds of millions of citizens endure the enormous conflict between despising the CCP’s bloody past and holding out hope for the CCP’s future.

When the evil specter of communism fell upon the human world, the Communist Party unleashed the scum of society and utilized the rebellion of hoodlums to seize and establish political power. What it has done, by means of carnage and tyranny, is to establish and maintain despotism in the form of a “Party Possession.” By using the so-called ideology of “struggle” that opposes nature, heaven’s laws, human nature, and the universe, it destroys human conscience and benevolence, and further destroys traditional civilization and morality. It has used bloody slaughters and forced brainwashing to establish an evil communist cult, creating a nation of warped minds in order to rule the country.

Throughout the history of the CCP, there have been violent periods when the red terror reached its peak, and awkward periods when the CCP narrowly escaped its demise. Each time, the CCP resorted to the full use of its cunning means to extricate itself from crises, but only to head for the next round of violence, continuing to deceive the Chinese people.

When people recognize the CCP’s villainous nature and resist being deceived by its false images, the end will arrive for the CCP and its unscrupulous nature.
Posted by MaKina at 10:31 AM