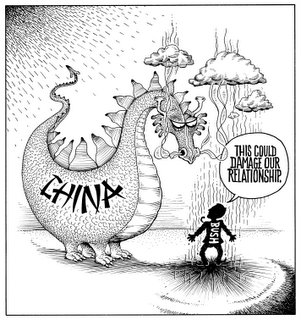 
Is this an optical illusion? Why is President Bush so soft with China’s dictators?

HONG KONG (Standard) 07 Feb. 2006 - Keeping up with the tradition of cleansing dirt before the arrival of the Lunar New Year, Beijing was busy getting rid of "bad elements." In the Year of the Dog, Beijing wants to make sure no watchdog barks.

The dirt, in this case, was a weekly insert, Freezing Point, published every Wednesday in the China Youth Daily since 1995. The Communist Party's propaganda department, citing the publication "viciously attacking the socialist system," ordered the shutting down of the weekly, which the authorities also condemned as deviating from the orthodox historical viewpoints handed down by the party.

This is only the latest crackdown on China's never free but increasingly vibrant media. On January 19, a former deputy editor of Fuzhou Daily stood trial on charges of fabricating and spreading false information on terror.

At the end of 2005, three top editors at Beijing News were dismissed, causing a rare walkout by journalists in protest.

The Chinese Communist Party has never valued press freedom, but this succession of crackdowns seems extraordinary. It doesn't square with a country which, according to many Western press and experts, is growing stronger and more peaceful every day, and is destined to recapture its historical place in the world. If anything, it is more a sign of paranoia and weakness.

Perhaps a little known decision by Beijing can shed some light on the state of mind of the occupants of the Zhongnanhai compound.

Last November, Beijing halted plans to let foreign newspapers print in the mainland. Shi Zongyuan, head of the general administration of press and publication, told the Financial Times: "The `color revolutions' were a reminder not to let saboteurs into the house and that the door must be closed, so we have closed it temporarily."

It is telling that members of the mainland leadership see their country in the same category as Georgia, Ukraine and Kyrgyzstan. They must know something we don't.

It's one thing for Beijing to try to silence critics - after all, it's stated clearly in the job description of a dictatorship. It's quite another for some US businesses, especially those supposedly in the business of spreading information, to assist Beijing in its job. For Internet giants to participate in the censorship game is disgraceful.

Yahoo helped Beijing track down reporter Shi Tao who was sentenced to 10 years in jail last spring. His only sin was to use Yahoo e-mail to send "state secrets" overseas.

Microsoft, the company owned by the world's richest man, Bill Gates, shut down the blog site of Zhao Jing in January. Zhao, a researcher at The New York Times' Beijing bureau, was using its MSN online service to criticize the firing of the editors at Beijing News.

Google, of course, has generated the latest round of controversy by launching a Chinese search service that bases its censorship decisions on guidance provided by Beijing.

While I understand companies are not human rights organizations and their job is to make money and not enemies, to get involved in the direct oppression of the Chinese people and try and hide behind the "we have to follow Chinese laws" excuse is simply no excuse.

Google perhaps can defend itself by pointing to the fact that, unlike Yahoo and Microsoft, it will not provide any user information to Beijing because e-mail and blog services will not be offered in China. But Google is the most hypocritical. It does not have a problem following the law when in China, but refuses to let the US government obtain data on its users' search habits. China carries more legitimacy than America to Google.

Republican congressman Chris Smith will chair a hearing to examine the operating procedures of American Internet companies in the mainland. If businesses only follow the dollar sign and Chinese laws, then it's time for Congress to do something.

It pains me to see the administration of George W Bush kowtowing to the Chinese regime.

At Kansas State University recently, Bush said he enjoyed warm personal relations with his Chinese counterpart and the importance of this "personal diplomacy" enabled him to press the freedom issue with the Chinese. Bush said that "nobody likes to be lectured in the public arena. I don't like it and I'm sure other leaders don't like it."

I'm dismayed at the return of the useless "quiet diplomacy" with China.

Condoleezza Rice also gave some disappointing remarks on China last week. She told an audience at the World Economic Forum in Davos that we need to encourage China to act responsibly and contribute more to the world.

"I do think that China is beginning to understand those obligations," she said.

For once, the usually sensible secretary of state was displaying wishful thinking.

But perhaps nothing captures the essence of US China policy more symbolically than what Deputy Secretary of State Robert Zoellick did in China, at the same time when Freezing Point was shut down.

He took some time off and went to the city of Chengdu and engaged in the important business of hugging a panda.
Posted by MaKina at 7:30 AM