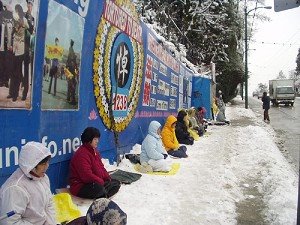 It turns out that the Ottawa federal court will not grant Han political asylum. He will likely appeal this decision. There is definitely something wrong with this picture.Here is the latest on this situation.

Lawyer Optimistic Chinese Defector Will Get Protection in Canada

Vancouver Sun: 06 April 2006 - ...While Han gave orders against abusing Falun Gong prisoners, he acknowledged there was violence against other prisoners in his camp, said the court decision.

Han, who is in his early 50's, went to the media last year with his story that fears for his life if he is sent back to China.

....The issue was not raised in the court ruling and Canadian law does not permit returning people to countries where they face the death penalty." (full report)

My letter to the Editor of the Vancouver Sun:

It is shocking to see that the federal court has refused to give political asylum to Han Guangsheng, best known as the ‘Chinese Schindler’. Last fall Han revealed that the majority of participants in “business delegations” coming from China are in fact regime officials or/and spies. And although he has helped lessen the mistreatment of the Falun Gong detained in Shenyang, it appears as if the judge is punishing him for his connection to "widespread and systematic human-rights abuses”. Then why is our government trading with China if it is so corrupt as they say it is? Isn’t that in itself linking us to those very same crimes against humanity? Hypocrisy is the word that springs to mind. Our government should practise what they preach in world affairs and start weighing the consequences. Han will likely be executed as a traitor when deported back to Beijing. It is within our Canadian Code of Law to not deport people to a country knowing that they will be faced with torture and/or murdered. Somehow I fail to see the legitimacy of our judicial system.

March 30, 2006 - Let's hope that the IRB lightens up sooner than later and recognize that Han Guangsheng has shown that he is worthy of getting asylum in Canada. For the Epoch Times' latest reports on defections from the Chinese Communist Party (CCP) go here. Have a look at the letter to the editor towards the end.

Han's lawyer argued his client was opposed to the Chinese government crackdown on Falun Gong and disobeyed orders.

TORONTO (CP) 29 March 2006 - A Federal Court judge reserved her decision Wednesday on whether the Immigration and Refugee Board was right to deny asylum to a Chinese defector for being a "willing accomplice" in crimes against humanity in his homeland.

Han was a former supervisor of prisons and labour camps in northeastern China who defected in September 2001 during a visit to Toronto. He claimed refugee status the following year.

The board ruled he was an accomplice in a system linked to widespread human rights abuses, failed to specify the crimes in which he was allegedly complicit and also erred in preferring documentary evidence to his oral testimony.

Han had argued at refugee board hearings that he tried to stamp out the mistreatment of prisoners and worked to protect their rights upon becoming disillusioned with the Chinese justice system.

Those abuses include the alleged torture of political dissidents and devotees of Falun Gong, a spiritual practice denounced by the Chinese government as an evil cult.

Han claims he ordered subordinates not to mistreat Falun Gong followers, investigated the abuse of imprisoned practitioners and ordered the release of others.

In an interview with the Canadian Press in June 2005, Han said he fears he will be executed if sent back to China.

He has compared himself to Oskar Schindler, portrayed in the film Schindler's List, who helped many Jews escape the Nazi regime.

A decision in the review could take several months, said federal lawyer Tamrat Gebeyehu, who presented the IRB's case earlier Wednesday in a Toronto court.

"We can't really tell how long it's going to take in the process at this point,: Gebeyehu said.


A friend sent me a copy of her letter to the editor on this topic.

So Han Guangsheng was a 'participant' in the abuse of Falun Gong practitioners. If this is true, he was most probably following the very orders of the Chinese officials who visit Canada and who are wined and dined by our politicians with tax payers' money. And they, would mostly likely be the ones to issue the order of execution, upon Han's arrival back in China. After all he was the one that broke rank and 'told' about the spy network operation in Canada. It is clear that such a scenario would cause an utmost embarrassment to Beijing. There is no doubt in my mind that the Chinese Communist Party (CCP) will set an example for others who might dare to also speak out.

Actually Han was known as a Chinese 'Schindler', who did his best to lessen the mistreatment of practitioners detained in the jails he oversaw. After he came to Canada, he joined the growing number of voices, both inside and outside of China, who dare expose the true situation in Communist China.

It is not surprising either that the court reporter, Ian McDougall or his colleagues, did not report on the many Canadian lawsuits for genocide and crimes against humanity filed by Falun Gong practitioners against our illustrious guests, well known persecutors, namely Jiang Zemin, Luo Gan, Huang Huahua, Chen Zhili, Liu Jing, Zhou Yongkang, Li Langqing, Wang Maolin, Wu Ganzheng. Protectionism is the word that springs to mind.

Hey, but there is always hope. Even if Canada decides to deport Han Guangsheng, maybe part of him--perhaps a liver, kidney or cornea (or even all three) will come back to live in Canada. It's time for the IRB to sober up and start weighing the consequences.

Epoch Times: A “610” Office Insider Exposes What Goes On In China’s Labor Camps