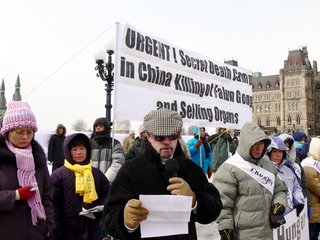 
On March 15, 2006 there was a rally on Parliament Hill in Ottawa, to call on the Canadian government to take immediate action to stop a state run secret extermination camp - Su JiaTun Camp, reminiscent of Auschwitz that exists in Shenyang city, Liaoning province in China, where Falun Gong detainees are being killed and their organs harvested and sold for profit by the state. The camp is equipped with a crematorium to burn the bodies to remove evidence, and no prisoner has ever been known to leave alive. Supporters are on a 72-hour hunger strike to protest the atrocity committed by the Chinese Communist Party (CCP). Look here to sign a petition. Brian McAdam gave the following speech to the rally. The speech is also posted at the Prime Time Crime blog.

“The Holocaust" was the systematic annihilation of six million Jews by Adolf Hitler and the Nazis during World War II. Nine out of ten were Jews. In addition, Gypsies, Soviet POWs, and prisoners of all nationalities died in the gas chambers. Auschwitz-Birkenau became the killing centre where the largest numbers of European Jews were killed. Mass murder became a daily routine. By mid 1942, mass gassing of Jews using Zyklon B began at Auschwitz, where extermination was conducted on an industrial scale with some estimates running as high as three million persons eventually killed through gassing, starvation, disease, shooting, and burning ...While this was going on so too were medical experiments.”1

The post - Holocaust world said: “Never again.” However, history is repeating itself as members of religious faiths and spiritual groups, and advocates of democracy are incarcerated, tortured and murdered in China.

…the Falun Gong, a spiritual movement founded in 1992 …is today to China's masters what the Jews were to pre-war Nazi Germany: a convenient scapegoat used to explain away the failings and insecurities of the state and its leadership.3

The Human Rights activist, Harry Wu, who was once imprisoned for 19 years in the Laogai prison system, was one of the first to reveal to the world that Communist China was harvesting human organs from executed prisoners.4

China broke its silence in December 2005 and admit for the first time that the organs of executed prisoners were sold to foreigners for transplant. For many years it has denied that such a trade existed. But the Deputy Health Minister acknowledged that the practice is widespread and promised to tighten the rules.5

The Communist Chinese regime has always had contempt for human life. It systematically imprisoned and murdered millions while the world has remained silent hoping to reap the fabled riches of the Middle Kingdom. Greed and money has trumped human rights. China has dangled billions of dollars of trade seducing many countries into ignoring human rights issues in China and allowing China to acquire industrial and military secrets. Since 1993 Canada, in the name of commercial diplomacy; closed its eyes to China’s abominable human rights abuses, and criminal and espionage activities in Canada, while pursuing a mirage.6

Many Western countries knowingly co-operated with the Third Reich during the 1930s and 1940s while Jews were sent to concentration camps.7

We ask that the new Canadian government call for an immediate international probe into this concentration camp and re-examine the former cozy relationship with this blood soaked regime which has been responsible for the deaths of an estimated 70 million people.8

1. The Holocaust - Crimes, Heroes and Villains

Sale of Human Organs in China

7. Governments' complicity in the Nazi holocaust

8. Stephane Courtois, Jean-Louis Margolin & others, (1999) The Black Book of Communism

The number of estimated deaths include between 6-10 million as a direct result of Communist action; 20 million of “counter-revolutionaries” dying inside the prison system; 20-43 million during the famine caused by Mao’s Great Leap Forward. Between 1-2 million were killed during the Cultural Revolution from 1966-1976, In addition 10-20% of the Tibetan population, an estimated 800,000, as a result of the cultural genocide there as China occupied the country.

Anonymous said...
This comment has been removed by a blog administrator.
3:06 PM

Communist China is denying this vigorously and their long arm extends into the US and Canada. As you know the CCP is notorious for hiding all evidence when caught in a violation, in this case genocide.
I, for one, trust the eye witnesses who have had the courage to report on this atrocity. We should work hard on our governments to condemn this genocide.