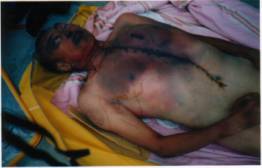 More chilling news on the Sujiatun Death Camp set up by CCP (Chinese Communist Party) key criminals, especially to harvest organs from live Falun Gong practitioners. Let's stop this genocide in its tracks--sign a petition here. For some of the latest reports on Sujiatun go here. If you're interested in knowing more about the CCP's ideology of killing take a look at the shocking 7th Commentary on the Communist Party, namely the part on cannibalism. You are sure to be stunned.

It has been revealed that Jiang Zemin and Luo Gan jointly established the Sujiatun Concentration Camp to persecute Falun Gong. The National Security Bureau under Zeng Qinghong is also involved. Some doctors conducted live experiments, and some high-ranking CCP officials use Falun Gong practitioners' brains as nutritional supplements. (full report below)

Clearwisdom.net: 23 March 2006 - The theft of bone marrow from an unsuspecting patient at the Shenyang Medical University's Fengtian Hospital, also called the No. 8 People's Hospital of Shenyang City or Central Hospital Affiliated with Shenyang Medical University, has been publicly exposed. According to the source, a patient with severe leg injury from a car accident was brought to the surgery ward at Fengtian Hospital in Shenyang City. The patient was under general anesthesia during the operation. A doctor from anther division carried a special needle, took a considerable amount of bone marrow from the patient and then left the operating room. The surgery resumed as usual. Theft of patients' bone marrow is an open secret at this hospital!

This incident involves a regular patient, but it reveals the cold-bloodedness and unspeakable brutality of the Chinese Communist Party (CCP)! Judging by the CCP's greed-driven, sinister nature, this cannot be an isolated case! Evidence shows proof.

The CCP set up a Nazi-style secret concentration camp in Sujiatun, where about 6,000 Falun Gong practitioners were held. After the practitioners are murdered and have their organs harvested and sold for profit, their bodies are burned in the crematorium to destroy the evidence. An investigative report by the World Organization to Investigate the Persecution of Falun Gong (WOIPFG) published on March 15 verified that there is indeed a large "market" for human organs in the Sujiatun District, Shenyang City in Liaoning Province. A systematic operation has been established and put in place at this death camp, from the death camp that holds "organ supplier" prisoners, well organized tissue-type matching service, organ removal operations, to disposal of the corpses. This macabre business extends all the way to the hospitals that are the final customers for these organs. The Falun Gong practitioners whose organs were harvested were arrested without any due legal process and completely isolated from society. No one knows their whereabouts. Their bodies are immediately cremated after their organs are harvested so that no traces are left behind.

The investigation results shows that organ harvesting was done live. Because the entire procedure was extremely cruel, a high percentage of doctors and other medical professionals who were involved in this operation developed severe mental disorders, some of them leading to suicide. It has been revealed that Jiang Zemin and Luo Gan jointly established the Sujiatun Concentration Camp to persecute Falun Gong. The National Security Bureau under Zeng Qinghong is also involved. Some doctors conducted live experiments, and some high-ranking CCP officials use Falun Gong practitioners' brains as nutritional supplements.

The CCP is so ruthless, operates outside any laws, and it stole bone marrow from an ordinary person, so is it then also possible that it is capable of using the same method to violate Falun Gong practitioners? Since it could even do things like selling human organs and disposing of bodies, based on CCP's evil nature, is it then difficult to imagine that agents of the CCP secretly stole or openly removed Falun Gong practitioners' bone marrow on a large scale and a frequent basis? Is there an even bigger and darker secret hidden behind the bone marrow theft incident?

The gods will not allow demons to do excessive evil. People's actions or non-actions will all impact their futures. We hope people who know the truth quickly expose the details, because it is no coincidence that the gods let you know the details. It is the gods' hope that you fulfill your mission. We also hope justice-supporting international organizations and all people would pay urgent attention to the more than 2,000 living beings that are still being illegally detained at the Sujiatun Concentration Camp. Their organs can be harvested and their bodies burnt at any moment!

Anonymous said...
This comment has been removed by a blog administrator.
3:02 PM

Communist China is denying this vigorously and their long arm extends into the US and Canada. As you know the CCP is notorious for hiding all evidence when caught in a violation, in this case genocide.
I, for one, trust the eye witnesses who have had the courage to report on this atrocity. We should work hard on our governments to condemn this genocide.