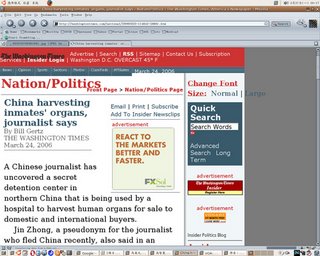 Mainstream media has finally broken their silence and the reports are coming in daily to expose the CCP's Sujiatun Organ Harvesting Death Camp especially set up to murder the Falun Gong. Nevertheless, the urgent support from the international community is much needed to stop this genocide. Please write to your government officials, the Red Cross, Doctors without Borders, to name a few, ask them to officially condemn this atrocity, and to launch a full scale independant investigation. Relevant information and petition can be found here. For the latest reports, view the Epoch Times online.

Why do we gather here today?

We all know why we gather: to condemn the horrifying truth of Sujiatun, the camp created by the Chinese Communist Party to turn humans in organ banks, Falun Gong practitioners into ashes, and desperate patients into unwitting - or in some cases, well aware - accomplices in hideous torture and murder.

We gather to call for an end to a practice - the killing of practitioners and other dissidents for their organs - that is Auschwitzesque. While the number of dead and soon-to-be-dead is at present only 6,000, the combination of evil intent, lack of respect for human life, and assembly-line efficiency that fueled the Nazi concentration camps is, sadly, alive and well where the Chinese Communist Party rules, and is likely to remain so until the Chinese people take their country back from the Communist regime.

But why do we gather here? Why in the capital of what is arguably the most powerful nation on earth? Why in what many consider the epicenter of the democratic world?

For this answer, we must look beyond the United States, beyond Communist-controlled China, to the battle between the democratic world and the tyrannical forces it fights in Iraq, Afghanistan, and throughout the globe. The latter have fallen under the bloody banner of "terrorism;" the main perpetrators are well known: al Qaeda, Saddam Hussein, the mullahcracy in Iran, the Assad family in Syria. What is not as well known is that all of these forces of evil - plus the northern Korean nightmare run by Kim Jong-il - have received aid and support from the Chinese Communist Party for years, including military and, in the case of the Iranian mullahs, even nuclear support.

In short, the Communists know that so long as the democratic world exists, their crimes against the Chinese people can never be kept secret. So long as there is an America to show that the people can govern themselves, the Chinese people will demand the same. What Abraham Lincoln once said about an America split between slave state and free state, the Communists know to be true about a world split between free peoples and enslaved peoples: "A house divided against itself cannot stand."

This is why we have gathered here; for these truths mean two realities. One: the Chinese Communist Party and the democratic world cannot co-exist, for one to survive, the other must perish. However, this leads to another, more hopeful one: the Communists not only face Americans, Europeans, Japanese, and others in the democratic world. They also face practitioners, dissidents, appellants, unpaid laborers, and maltreated farmers.

We gather here because Sujiatun is not only an act of unspeakable evil, it is a warning to those in the democratic world of what this regime is trying to hide, and why it feels it must survive to hide it - at any cost. Let us heed this warning, and work together to ensure that it is the democratic world that prospers and the CCP that perishes.

Thank you, God Bless you, and may God Bless the American and Chinese peoples.

The following is the statement yours truly would have delivered to the Lincoln Memorial (Washington, D.C.) rally on March 12 if I had been able to attend.

Today, we gather to express our outrage at the Sujiatun prison camp, so bravely exposed by the Japanese reporter, "Mr. R." The existence of this camp shocks us all, but it should surprise no one.

With 6,000 victims, the murder at Sujiatun does not yet compare with Auschwitz, Treblinka, or the Gulag Archipelag, to say nothing of the Mao's Great Leap Backward and the Cultural Revolution. However, the same combination of evil, contempt for human life, and assembly-line efficiency that fueled the death camps of the Nazis and the Soviets is there in Sujiatun. For this, the Chinese Communist Party must be treated as the pariah and enemy of humanity that it truly is.

However, the Communists have not limited their victims to Sujiatun, or even to Communist China. Their willingness to coverup the extent of SARS in 2003 allowed the disease to spread around the world. Today, we now know what we have long suspected: the Communists repeated this coverup with bird flu. The ramifications of that still have yet to be suffered.

Finally, but certainly not least of all, we have now seen the long arm of the Communist regime inflitrate the United States itself. The attack on Yuan Li, the numerous break-ins against Epoch Times staffers and officers, and now, possibly, the assassination of Allen Leung. While we do not yet no for certain why Mr. Leung died, it is quite plausible that he has become the first Communist casualty on American soil, and a frightening escalation of the Communists' plans to silence and intimidate the overseas Chinese people, in San Francisco, here, and around the world.

Yet, despite, all of this blood, despite this collection of horror and outrage, we gather here not in despair, or anger, but with hope; for we know that these grotesque actions are not signs of strength, but of desperation. They are not the actions of a secure regime, but of a regime well aware it is in a race against time, and that it is losing.

We know this because we know the truth about the "new socialist countryside." We see the verdict the Chinese people have given the regime in Hanyuan, Taishi, Shanwei, and throughout the rural interior. We know that the Nine Commentaries (on the Communist Party) have not only led more than one in every eight Communists to leave the party in disgust, but by that number alone, they have reached one in every 150 Chinese citizens. This means the Nine Commentaries has reached every village, every farm collective, and every high-rise apartment complex in Communist China. The truth is not only out there, it is everywhere.

We in the democratic world must recognize this, and act accordingly. In order to defeat the Chinese Communist Party, we must isolate it, contain it, and undermine it. With the Nine Commentaries spreading faster than a Harbin chemical spill, the third plank is already in place. However, we must still isolate and contain the regime if we are to defeat and survive it.

By isolating the regime, I mean we must sever the economic ties that the Communists use to damage our economies and fatten their own pockets. That means an end to Permanent Normal Trade Relations. Normal Trade implies a normal government. The Chinese Communist Party, with organ harvesting killing camps, hidden epidemic victims left to die, and an unrivaled record of support for terrorists and other anti-American regimes, is many things; normal is not one of them.

This also means the regime cannot be allowed to enjoy the propaganda bonanza that is the 2008 Olympic Games. The Games must be moved out of Communist China, or barring that, the democratic world must boycott them in favor of its own, Communist-free competition. The values of Lenin, Mao, and Jiang Zemin are completely incompatible with those of the Olympic spirit.

Finally, this means the democratic world must be prepared to stand together against the Communist menace. The Bush Administration has started well here, by rebuilding the alliance with Japan, and creating a new one with democratic India. From these alliances, a ring of freedom including South Korea and Taiwan can not only surround Communist China and protect the rest of the democratic world, but it can also serve as a constant beacon to the Chinese people, an endless reminder that liberty need not only be ours, but can be theirs too. This three-part strategy - isolation, containment, and undermining - can lead to a free China.

I know many of you have heard the motto: it's always darkest before the dawn. My friends, the dawn of freedom is coming to China, but first, we must get through the dark hours together. The democratic world and the Chinese people must rely on each other, build upon our own strengths, and remain vigilant against our common enemy: the Chinese Communist Party. If we do, we will indeed see the end of that regime, and China will take its rightful place in the democratic world.

So from Sujiatun to San Francisco, let us take these outrages for what they are: the dangerous but desperate flailings of a dying regime. However, let us also remember that with each day that regime limps along, more people will die. Thus let us add not anger, but urgency to our mission; let us not despair, but double our efforts to bring freedom to China, security to America, and peace to the globe.

Thank you, God Bless you, and may God Bless the American and Chinese peoples.
Related Articles:

Claims of Concentration Camp in Turkistan
Posted by MaKina at 10:31 PM