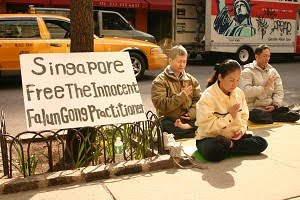 The Epoch Times - He clips the boards together so they are more sturdy, and leans them up against a wall each day to make his display. Then he sits on the ground, on a yellow cloth, to meditate beside them. Sometimes he talks to the passersby. Falun Gong is a self-improvement practice that teaches truthfulness, compassion and forbearance as a way of life.