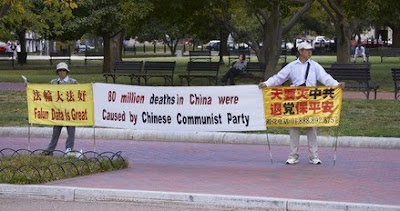 Telegraph.uk: China's human rights record has attracted criticism from around the world for many years. David Cameron, the British Prime Minister, has been urged to tackle the issue on his trip to the country.

Here is Amnesty International's list of the 10 biggest problems, with an indication of which ones are getting particularly worse.

China executes more people each year than any other country and while official statistics remain secret, Amnesty’s figures show that China executed at least 1,718 people in 2008, nearly three-quarters (72%) of the world’s executions. Earlier this year, the number of offences that carry a capital punishment was cut from 68 to 55 – although the reality is that this will have little impact on the net number of executions.

People are detained in "Re-education Through Labour" camps for up to four years without any trial, often with harsh conditions. It is frequently used against petty criminals, critics of the government or followers of banned beliefs.

Harassment of people who stand up for human rights

People who speak out on politically-sensitive topics are frequently put under house arrest or imprisoned. They include defence lawyers, journalists, workers’ rights activists, villagers protesting against land seizures and relatives of people killed in Tiananmen Square.

Hundreds of websites are blocked or banned in China. Search results are filtered, and websites censored, including those using words like "freedom", "human rights" and "Amnesty International". With around 30 journalists and 50 Internet users known to be behind bars, China has been described as "the world’s leading jailer of journalists".

China’s judicial system falls way short of international standards. Failings include lack of access to a lawyers, extracting confessions through torture and political interference in the judiciary.

Persecution of people for their beliefs

Members of unofficial Catholic churches or underground Protestant "house churches" are frequently detained in violation of their rights. Muslims in Xinjiang are persecuted as well: some books are banned and mosques have been closed. Tens of thousands of members of the banned Falun Gong movement have been detained labour camps, prisons and psychiatric hospitals.

Torture and ill-treatment is widespread and methods include electric shocks, suspension by the arms, kicking, beating and food- and sleep-deprivation. Those detained for their political views, human rights activities or religious and spiritual beliefs are at high risk of torture in custody, particularly if they refuse to recant or renounce their beliefs.

Dozens of people are believed to remain in prison 20 years after the crackdown on the 1989 pro-democracy movement. Calls for a full investigation are ignored and any public discussion of the events of 4 June 1989 remains censored from newspapers, websites and other media. Some Chinese people are totally unaware of the truth of what took place.

Independent trade unions remain illegal in China. Low wages or non-payment, mass lay-offs, poor working conditions and corrupt management practices have led to a wave of labour disputes in China which have often been met by the authorities with intimidation and sometimes arrests and long prison sentences.

In Tibet freedom of expression, religion and association continue to be severely restricted. Dozens of prisoners of conscience, including Buddhist monks and nuns, remain in prison. In late 2008 four Tibetan children, all aged 15, were detained on suspicion of writing pro-Tibetan independence slogans. Amnesty received reports that electric prods were used to torture the children. Other Tibetans, including monks and nuns, have been shot. More