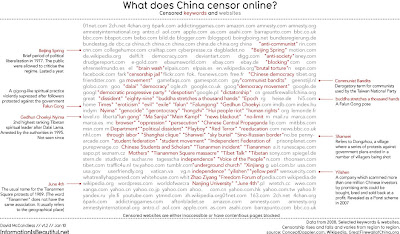 Clearwisdom.net by Long Yan -The Internet information blockade by the Chinese Communist Party (CCP) is well-known in the international community, and Falun Gong is one of the main topics targeted by the blockade.

On April 14, 2005, Harvard University law professor John Palfrey published a report on China's Internet blockade. The report showed the following results: For users inside China, 10% of pornographic sites were blocked; 60% websites that express anti-CCP views were blocked; 48% of websites containing information on the Tiananmen Square Massacre were blocked; 90% of websites publishing the Nine Commentaries on the Communist Party were blocked, while 100% of sites with positive information about Falun Gong were filtered out.