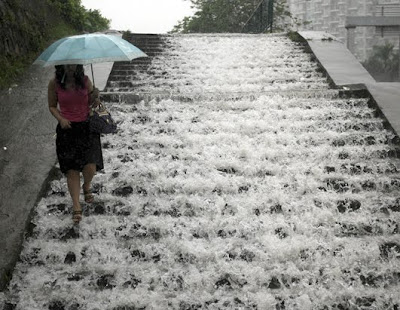 Epoch Times: Video - The floods now besetting China may be related to the country’s trajectory of economic development, set by the Communist Party, which has pursued GDP growth at massive environmental cost and consequence, according to experts interviewed by The Epoch Times.

Southwestern China, stricken by severe drought in the first half of the year, is now suffering from flooding—along with three in four Chinese provinces, the worst since 2000.

Water resource experts believe that drought and flood are related, and that both are caused by water loss and soil erosion, which leads to a rupture of the ecological balance.

With thousands of potential and confirmed deaths so far, the heavy rain is expected to continue, putting more pressure on reservoirs and other flood control projects, according to forecasts by China's National Flood Control and Drought Relief Headquarter. Read more...
Posted by MaKina at 10:23 AM