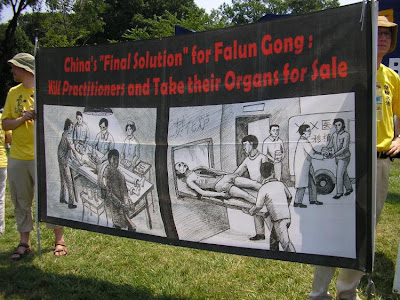 The Great Protest Blog: The Communist Party of China represses every belief system it does not control. At one time, one could say that the Party would repress every belief system other than its own. But with the switch from socialism to capitalism highlighted by then president Deng Xiaoping's statement 1984 "to get rich is glorious", Communism in China was gutted of its ideological content. All that was left was the hollow shell of power to which the rulers have held on to for dear life. Despite ceasing to stand for anything except enriching and empowering its cadres, the Communist Party will not accept any other belief.

What is striking about Chinese Communist repression of the Falun Gong is not so much the fact of repression as the extent of repression. Practitioners of Falun Gong are persecuted far more, far worse than adherents of any other belief.

Falun Gong has the ignominious honour of leading by far the parade of human rights victims in China. They represent two thirds of the torture victims. The UN Special Rapporteur on Torture's 2006 report on his 2005 mission to China1 indicated that 66% of the victims of alleged torture and ill-treatment in China were Falun Gong practitioners, with the remaining victims comprising Uighurs (11%), sex workers (8%), Tibetans (6%), human rights defenders (5%), political dissidents (2%), and others (persons infected with HIV/AIDS and members of religious groups 2%)2.

Falun Gong represents half the people in detention in re-education through labour camps. The United States Department of State Country Reports for 2008 state... Read more