Many not part of economic miracle in China 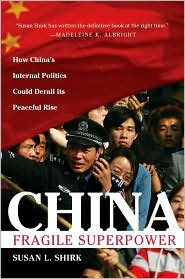 How China's Internal Politics Could Derail Its Peaceful Rise
The Standard by Mary Ma: The mainland overtaking Japan to become the world's second-largest economy - behind only the United States - underscores the strenuous efforts the nation made in reforming its economy over the past several decades.

But let the celebration be short because there is still a host of tasks waiting to be done before the planet's most populated country can truly claim to be an economic superpower.

There is little doubt China is now the second-largest in terms of crude gross domestic product figures. Its GDP was US$1.337 trillion (HK$10.428 trillion) in the second quarter, compared with Japan's US$1.288 trillion.

Given the mainland's persistent high growth rate, it is not surprising to see it surpass Japan in economic scale. Now, it's unlikely Japan will be able to overtake China in view of its serious aging-population problem.

But has the mainland really surpassed its neighbor?

In this regard, the mainland is only a developing country, at least until its economic miracle trickles down to most people.

Obviously, there is still a very long way to go before mainland people can enjoy living standards comparable with that of Japan and the United States.

China's rise in recent years has attracted hostility in some sectors, not only in the West but among its Asian neighbors.

Long-standing critics likely won't hesitate to renew pressure on China and clamor for it to be treated as a developed country rather than a developing one.

It is also foreseeable the international community will expect China to conform with higher standards in a number of areas, from environmental protection to human rights. Those are only part of the price attached to the prestigious new tag.

In the meantime, it will be more meaningful for mainland cadres to focus on finishing the achievable and to keep the momentum rolling steadily rather than blind themselves with superficial figures.

Only then will people across the border realistically look forward to improving their living standards. Read more...