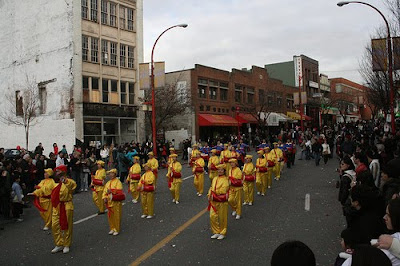 They were not part of the parade!
Canada Free Press / MWC News - by Marie Beaulieu: Updated - Recently the Parade Preparatory Committee for the Year of the Rabbit 2011 Vancouver Chinatown Spring Festival Celebration rejected the Vancouver Falun Gong group’s application to participate in the annual Chinese New Year parade under the pretext that they don’t accept any new groups.

The application was delivered in person by two Falun Gong practitioners on November 23. Upon entering the office, the practitioners were verbally assaulted by the Chinese Freemason representative who sits on the Parade Committee. The man refused to give his name, threw the application in the rubbish bin, and rudely ordered the practitioners to leave at once. Later a written notice of rejection signed by James Chu was received on December 24.

This is not the first time that the Falun Gong application has been rejected by this committee. They have been going through this process with them since 2003 although in 2009, the city police allowed the group to march one block after everybody else simply because the committee would not give them the necessary approval to be part of the parade. At that parade, the Chinese Freemasons formed a human link in front of practitioners to block them and keep them from marching ahead. As a result the Falun Gong group ended up about two blocks at the back of the parade. Hmm...

Looking at the past annual entries in the New Year parade, the Vancouver Falun Gong group is currently one of the biggest groups comprised mainly of Chinese participants. So why not let them in the parade? After all, they are a peaceful and responsible group. All they want to do is to have the right as Canadian Falun Gong practitioners of Chinese descent to celebrate the Chinese New Year with the community.What's wrong with that?

Of course, the Falun Gong community feels deep regret at being rejected yet again and want to raise awareness about this situation which is basically the "Chinese discriminating against Chinese" amidst our Canadian society. Needless to say, the Falun Gong group, whose majority of members are of Chinese origin, form an integral part of the Chinese community and contribute to its well being in many ways, and should be acknowledged as such.

It's not hard to imagine that the originating oppressor this time is the Chinese Communist Party, the current oppressors are our own Chinese community, and the target is Falun Gong. This ties in with what CSIS Director Richard Fadden said last year about influence from foreign governments on Canadian soil. We need to recognize this as a significant problem in Vancouver and Canada sooner than later.

If you'd like to help remedy this situation so that this type of discrimination will cease and that the parade organizing committees start living up to its parade theme: “the celebration of the new Chinese Lunar Year in conjunction with the many diverse and multicultural groups within our community...”, please write to your friendly Member of Parliament and City Councillor before February 6, which is the parade date. Together we stand strong, divided we fall.