Why I Protested Hu Jintao at the White House? To stop the killing of the Falun Gong for their organs 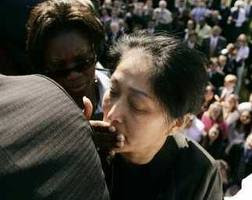 AP photo of a Secret Service officer covering the mouth of Wenyi Wang as she was escorted from the camera stand on the South Lawn yesterday (Apr 20, 2006).

The story behind the 2006 protest By Wenyi Wang

Epoch Times: On April 20, 2006 I interrupted remarks by China’s paramount leader Hu Jintao at a press conference at the White House with a simple protest: I shouted and held up a banner.

In my protest I shouted two phrases in Chinese. I first shouted “Stop the persecution of Falun Gong.” I did so to try to stop an atrocity then unfolding in China. We had learned that the harvesting of organs from living Falun Gong practitioners in China was accelerating.

On March 9, 2006, The Epoch Times had broken the story of how hospitals in China were removing organs from still-living Falun Gong practitioners in order to supply a booming transplantation industry.

After the story broke, I was assigned to work full-time on it. I am an M.D. in pathology and a a Ph.D. in neuropharmocology. During this time I worked with witnesses to the organ harvesting on a daily basis. I am also a practitioner of Falun Gong. More...