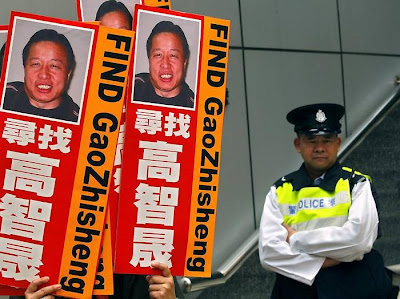 Xia Yiyang is from the U.S.-based Human Rights Law Foundation. He believes the current situation in China has to do with the Communist regime's illegal persecution of the Falun Gong spiritual group 12 years ago. In 1999 the regime launched a nation-wide campaign aimed at eradicating the practice. That campaign continues to this day.


“The regime established a system to damage its own legal system, this was intentional and systematic. This of course did not stay within the Falun Gong group, and was used on others. Now we can see that some human rights activists, lawyers and even artist are being persecuted under the same system,”said Xia Yiyang.
More at NTDTV
Posted by MaKina at 11:24 AM