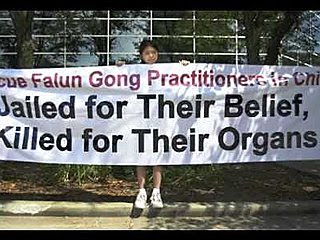 In short, it was a sorry display of pandering and ignorance.

It’s a regime that will literally do anything to advance its own interests.

If that means blackmailing, lying, intimidating, subversion, espionage, cheating, so be it. China will do it.

Economic deals and investments in Canada are in China’s interests.

We all know China specializes in selling human organs for transplants.

It’s one thing to take the organs of criminals sentenced to death; it’s another to “harvest” organs from political dissidents.

There’s evidence body organs have been taken from Falun Gong practitioners who are not political and no threat to the regime — except that their popularity among the people offends the communist hierarchy.

When Baird was asked about the tens of millions killed by Chinese Communism, he noted Russia and Germany “have been through challenges in their history. We now count them as allies.”

Germany and Russia are no longer ruled by Nazism and communism.

China has never revoked communist eagerness to kill its own citizens.

As for Tibet, China boasts it’s “peaceful and free” since Chinese soldiers took over, and imported Chinese to outnumber Tibetans.

Which brings us to John Baird himself.

One wonders why he was appointed foreign minister, a hometown boy who knows nothing of the world.

Look at his record.

Baird is 42 and from the age of 15, has been only interested in Conservative politics.

He has no background in the job market, never met a payroll, never been in the workforce, no real experience in life. A pure political animal nourished in the corridors of Conservative politics.

Baird was first elected to the Ontario Legislature in 1995 at age 24, and proceeded through various cabinet posts until becoming a federal MP.

He lists his pre-political job as “consultant.”

When Baird was asked about the deportation of Lai Changxing from Canada to China after 12 years of being in Canada, he wouldn’t comment.

Lai may be a scoundrel, but China has assured Canada this alleged leader of a smuggling, bribery and fraud operation will not face execution or torture.

Do you believe China can be trusted?

What’s scandalous about the Lai case is his previous lawyer with experience in China, Clive Ansley, was assured by Canadian officials that Chinese witnesses who testified on the assurance that their identities would be kept confidential, were subsequently betrayed by Canada, their names given to the Chinese. The whereabouts of witnesses are unknown.

In 2003, Anlsley wrote an outraged letter to then-Liberal Immigration Minister Denis Coderre noting the “treachery” and the “unconscionable betrayal” of Chinese who had trusted Canada’s promise of confidentiality.

The Chretien government did nothing.

Also, Baird wasn’t prepared to make waves over the kidnapping in Uzbekestan, and imprisonment in China, of Canadian citizen Huseyin Celil.

More at Toronto Sun
Posted by MaKina at 5:10 PM