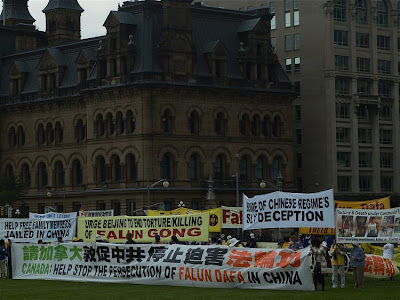 ET: Without pants or shoes, Han (a Falun Gong practitioner) was taken to Liaozhong County Detention Centre. He was detained until July 13, possibly as a result of a press conference Zhi held on Parliament Hill that day to call attention to his plight. Though she is glad her cousin is free, she said many others remain detained.

A source from Baird’s office wouldn’t say whether the minister will speak publicly about the persecution, even as Chinese state media record every handshake and smile brandished by Canada’s top diplomat as an endorsement of their policies and persecution campaigns.

More at Epoch Times
Posted by MaKina at 8:07 AM