15,000 march in Taipei to protest organ harvesting in Communist China 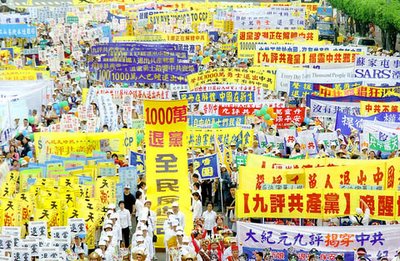 And 10 million quit the CCP!

A moving truck showed a scene of Chinese doctors harvesting organs, with several doctors standing around a patient tied to an operation table, scalpel in hand.

Behind the truck, a column of Falun Gong members - in handcuffs, shackles and dark prison clothes - walked silently led by a rope by a whip-cracking prison warden.

Falun Gong has accused China of persecuting its members since 1999 when Beijing banned the group as a sect, and of killing Falun Gong members to harvest their organs for organ transplants.

The Taiwan Falun Dafa Society accused China of running a Nazi concentration camp-style facility to harvest organs from some 6,000 detained Falun Gong members and selling them to patients who need transplants.

Taiwan Falun Gong reported on March 20 that the operations were being performed at Shenyang Thrombosis Hospital in north-east China.

According to their source, an unnamed doctor that has since emigrated to the US, the harvesting of organs was carried out in the hospital's air raid shelters, and the bodies of the Falun Gong members were cremated in a furnace.

China has denied the accusations, and has enacted new interim regulations on organ transplants to be implemented on July 1.

Besides denouncing China's harvesting of organs from Falun Gong members, the demonstration called on members of the CCP to quit the party.

Since the Falun Gong launched the global 'Quit the CCP' movement in 1999, nearly 10 million members have left CCP, about 10 per cent of the party's membership.

'Large numbers of communist party members quitting the party led to the collapse of East Germany and the Soviet Union. So far 10 per cent of CCP members have quit the CCP. This shows the days of CCP are numbered,' Chin Heng-wei, a writer and political commentator, said at the rally before the march.

Falun Gong is a spiritual group which combines meditation and exercise and preaches truth, compassion and endurance.

China banned the 'cult' in 1999 and followers who refuse to renounce their beliefs have been detained for re-education. The movement has millions of followers worldwide.