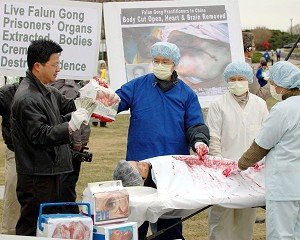 When Parliament opened April 3, about 200 people, most of them practitioners of Falun Gong, demonstrated on the lawn to raise awareness of eyewitness accounts of these abuses. They were joined by several MPs who called for Prime Minister Stephen Harper's government to investigate.

Falun Gong, also called Falun Dafa, is based on qigong, "the practice of refining the body and mind through special exercises and meditation," according to the organization's website.

On April 4, Falun Dafa Association of Canada spokeswoman Lucy Zhou told an Ottawa news conference about three eyewitness accounts from China about "secret concentration camp-like facilities that arestaffed by surgeons and equipped with crematoriums to dispose of corpses and other evidence."

Zhou said one of the sources, a medical doctor who served in the Shengyang military zone, said about 36 concentration camps hold Falun Gong practitioners and "other prisoners of conscience." Zhou, however did not know how many of those prisoners might be Christian.

Amnesty International is in the process of doing its own investigation, according to spokeswoman Beth Berton-Hunter.

MPs who have been following the plight of Falun Gong in China believe the allegations are credible.

"They are certainly willing to kill, torture and mutilate people for opposition to their regime. The nuance between torturing and killing people and harvesting their organs isn't very much."

Anders said he has seen evidence of torture that demonstrates to him the Chinese "don't have much respect for the sanity of life."

Liberal MP Dr. Keith Martin told CCN that while he does not know to what extent organ harvesting is taking place, he is not surprised by the allegations.

Zhou told the news conference the reporter for Japanese television who broke the story said the estimated two million Falun Gong practitioners in detention are targeted because not enough organs come from death row. According to one of the eyewitnesses, a former staff member at a facility in Liaoning province, about three-quarters of the 6000 Falun Gong prisoners held there had their hearts, kidneys,corneas and skins harvested, Zhou said.

Zhou pointed out the government-sponsored website for the China International Transplantation Network Assistance Center boasts "it may only take one week to find out the suitable donor," a rate she said is not matched in any developed country where organs are donated.

"So many transplantation operations are owning to the support of the Chinese government."

The site acknowledges that in many areas China's health care is not as advanced as in developed countries, but claims: "in the are of organ transplantation, the mode of the operation is the same all over the world, and the level of medical technology in China is the same as that of a developed country."

Zhou said this site is further evidence the government may be harvesting organs to meet the demands of this international clientele.

Ogan Transplants Boom; China is the Leader in Transplants, but Busines is Beset by Claims that Organs come from Executed Prisoners