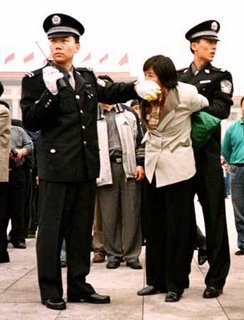 This link takes you to a news video covering Chinese people being evicted from their homes and having their homes torn down. It also shows a protest by villagers last year where 6 people were gunned down. It's 12 megabytes.

Prison Planet Blog: 18 April 2006 - Sky News recently produced a segment which highlighted how, despite fierce anger and resistance amongst the people of China, the Communist Government has instilled such fear and has such control over the media that very few dare to stand up and speak out. Those that do are forcibly quashed.

The Government and its contractors are seizing people's land and homes and building their own developments on it, forcing the population into living lives of poverty and squalor.

The state controlled Chinese media does not cover this because they know they would be immediately shut down if they did. The only footage that comes out of China is shot by the people themselves or undercover foreign reporters.

These revelations should remind us of the fact that tyrannical governments, in order to succeed know they have to infiltrate the lives of their populations to every degree, not allowing any form of self sufficiency or independence to endanger their iron fist control. (full report)

The CCP cheats the peasants once and again