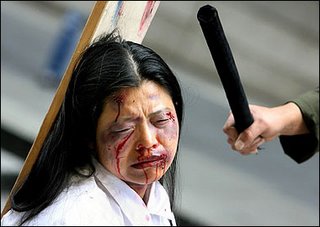 Bo Xilai is a very familiar name to most Falun Gong practitioners...It is worth mentioning that in January 2004, Bo Xilai was put on the Royal Canadian Mounted Police’s watch list of 45 people for his role in the persecution of Falun Gong and barred entry into Canada when he was planning to accompany Hu Jintao on an official visit last September (2005). Furthermore it is possible that Bo Xilai is connected to the death camp conspiracy in Liaoning Province according to US Dr. Morton Sklar.

Epoch Times: Dr. Morton Sklar, attorney and Executive Director, World Organization Against Torture/Human Rights, has filed lawsuits against Bo Xilai, who is currently the Minister of Commerce for China, but until February 2004, was governor of Liaoning province, which Sklar said has the largest number of Falun Gong practitioners detained in China. It was no surprise therefore to attorney Sklar that the death camp was located in Liaoning province in Northeast China, and that as governor, Bo Xilai would have had to know and approve what was going on. (full report)

Bo is due in Wellington late Wednesday as a member of a Chinese delegation headed by Premier Win Jiabao.

Falun Gong claims Bo was responsible for the torture and deaths of followers of the movement, banned in China, while he was governor of Liaoning Province from 2001 to 2004.

Similar suits filed by Falun Gong members in other countries have failed.

Two similar applications in Britain were rejected because of Bo's diplomatic immunity, and two suits in Spain were thrown out because no Spanish citizens were involved and none of the alleged crimes took place on Spanish soil.

New Zealand Prime Minister Helen Clark said she was not aware of Falun Gong's intentions, and had no comment to make.

But she told a press conference on Monday that Wen's visit was important, and would give new impetus to free trade talks with China.

Falun Gong -- also known as Falun Dafa -- is a spiritual discipline for the mind and body, according to its New Zealand website.

It claims 100 million followers throughout the world but has been outlawed in China. Supporters claim the ruling Communist Party has illegally detained thousands of its members.

Polite protesters who riled a dragon