Censorship, organs, Communist China, and us 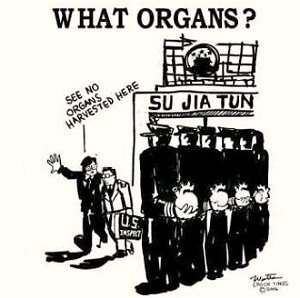 Time Europe: 23 April 2006 - ( ... ) But Falun Gong activists aren't the only ones concerned about China's organ trade. A day before Hu's interrupted White House speech, the British Transplantation Society, a group of 800 surgeons, issued a statement criticizing the use of death-row prisoners' organs in transplants — because it cannot verify China's claim that it only procures organs from prisoners who have given consent. "I don't believe anybody in a prison would be sitting around having voluntary consent discussions," says bioethicist Arthur Caplan of the University of Pennsylvania. (full report)

Update: The BTS statement (above) is really timely. WOIPFG have just released a new factual report further confirming evidence of organ harvesting in China's labour camps. Meanwhile the two witnesses who first exposed the Sujiatun death camp openly gave their testimonies at a press conference held in Washington DC last Thursday. Earlier, Vancouver's Wang Yuzhi related her own experience in China's labour camp to the National Press Club where the Coalition to Investigate the Persecution of Falun Gong (CIPFG) reinforced the need to have all labour camps investigated to collect more evidence. Go here for the latest Epoch Times news reports on this topic.

The following piece from Chris Smith of Global Human Rights is a great overview of the present situation in Communist China. And lastly it would seem that SKYPE has just caved in to China and joined the censorship gala.

Google...China...and Us
Moral challenges we face

By US Representative Christopher Smith

National Review: 20 April 2006 - On Wednesday, I conducted a hearing to examine China's human-rights record. Over the years, I have held more than 25 hearings on human-rights abuses in China and although some economic progress has been made, the human-rights situation remains abysmal.

Among other things, this week's visit of President Hu Jintao to the United States provides an opportunity to expose the terrible human rights situation in China today on a global stage. And it will, I hope, convey our unshakeable regard and commitment to press Beijing for serious, measurable, and desirable reform. Any relationship we have with China must begin with a fundamental respect for basic human rights. The people of China deserve no less. It is our moral duty to stand with the oppressed, not with the oppressor.

State Department and other human-rights watchdogs indicate that Chinese government's repression of its citizens continues. In fact, the current regime is one of the worst violators of human rights in the world. The most recent State Department Human Rights Report for China is approximately 45,000 words and lists 22 major rights problems.

Beijing views the information on the Internet as a potential threat to the party's control over the people and the monopolization of political power. And so, they restrict it. The freedom to publish information and read news on the web unfiltered does not exist and individuals who attempt to speak freely are frequently imprisoned and tortured. U.S. corporations should not be aiding in that process. Yet at a February hearing I chaired on global Internet freedom, some of the biggest corporations in America revealed how they have partnered with the Chinese secret police to find, apprehend, convict, and jail religious believers and pro-democracy advocates.

Though Yahoo voiced their profound regret for the imprisonment of Shi Tao for 10 years, they couldn't say — and didn't seem to know — how many others were condemned to jail and torture because of their willingness to comply with the secret police. When asked under what conditions — court order, police demand, a fishing trip — Yahoo surrenders e-mails and files to authorities, their representative declined to reveal the information because it would break Chinese law. Sadly, it was revealed at our hearing that Yahoo's cooperation with the Chinese police has seemingly lead to the imprisonment of another democracy advocate, Jiang Lijun.

Google, for its part, created a search engine tailored to the wishes of the People's Republic of China. Type in any number of searches, for "human rights," or "Tiananmen Square massacre," or "Falun Gong," and the site conveniently reroutes the web surfer to government propaganda — much of it heavily anti-American, anti-Bush, and full of hate. Google responded to concerns about enabling a dictatorship to expand its message of hate by hiring big-time lobbying firms like Podesta-Mattoon, and the DCI group to put a good face on it all — and presumably kill my pending legislation, the Global Online Freedom Act of 2006.

Amazingly, Cisco showed no concern whatsoever that its "Policenet" technology — a tool for good in the hands of legitimate law enforcement, but a tool of repression in the hands of Chinese police — has now linked and expanded the capabilities of the Chinese police. Microsoft censors and shuts down blogs that the government objects to. (So I'm guessing Bill Gates kept human rights off the agenda when he hosted Hu on Tuesday.)

A Stalinist Nightmare Revived for the 20th century

China's continued repression of religion is among the most despotic in the world. Citizens practicing a faith other than officially sanctioned religions are often subject to torture, imprisonment, and death at which time prisoner organs are frequently harvested. Christians, Tibetan Buddhists, and Muslim Uighurs are all being persecuted for their faith. Today, numerous underground Roman Catholic priests and bishops and Protestant pastors languish in the infamous concentration camps of China for simply proclaiming the Gospel of Jesus Christ.

Beijing reserves a special hatred for the Falun Gong. Nearly seven years ago, the government began its brutal campaign to eradicate Falun Gong after party members and Army officials had begun to practice the faith. Like all totalitarian governments, the PRC fears and hates what it cannot control. It is a Stalinist nightmare revived for the 21st century.

China's one-child per couple policy, decreed in 1979, has killed hundreds of million babies by imposing Draconian fines — up to ten times annual salaries — on parents. Brothers and sisters are illegal and sex selection abortions have resulted in gendercide (100 million girls who should be alive today are not). One Chinese demographer has admitted that by 2020, forty million Chinese men won't be able to find wives because population control will have destroyed the girls.

There is no recourse for millions of Chinese laborers trapped in poor working conditions. Those who protest unjust wage and labor practices outside of the government-controlled labor union are arrested and imprisoned. Citizens are often persecuted for seeking help from the court system to secure rights that the law, as restrictive as at is, guarantees them. Lawyers who seek to help them are threatened, harassed, beaten, disbarred, and jailed. They may join countless prisoners of conscience in their modern-day concentration camps.

China admits to continuing a barbaric policy of harvesting human organs for sale and transplant. We are told that since 1993, there have been over 65,000 transplant procedures performed in China and a deputy health minister recently stated that 95 percent of the organs are from executed prisoners. In an effort to boost profits, it is reported that some provincial or local officials have begun to allow mobile medical vans at execution sites to facilitate the harvesting of prisoners' organs. The State Department and the U.N. are investigating claims that China is targeting the thousands of innocent Falun Gong prisoners it holds for organ harvesting and perhaps not even waiting until they are dead.

The Communist regime in the Soviet Union fell after the economy collapsed and voices of freedom and democracy were able to break through the walls of repression. The Communist regime in China today has learned from the mistakes of the former regime and seeks to build and consolidate economic power while quickly and harshly stifling dissent. Human rights are everyone's rights. Governments are instituted to secure, protect, and safeguard those rights. Human rights aren't privileges. Human rights are worth fighting for, even when inconvenient.

Skype The Latest Firm To Comply With China's Censors

...Such automatic filters remove controversial topics such as 'Falun Gong' and 'Dalai Lama' from messages (full report)
Posted by MaKina at 11:03 AM