How Corrupt is the United Nations? 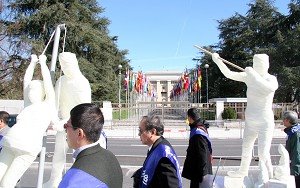 "How corrupt is the United Nations?" is the title of Claudia Rosett's new book (coming out soon) and below is one interesting comment. Unfortunately Claudia fails to mention the new genocide in Communist China. The FalunGong cannot wait ten more years before the UN sends the envoy to investigate the China laogai--the organ-harvesting death camps deserve immediate attention as the CCP is killing them like flies. For the latest reports on this topic look here.

"The UN vowed "never again" to abdicate as it did in Rwanda and Srbrenica when faced with genocide. Yet in Darfur, with genocide underway, it has refrained from acting against Sudan -- which is a member of its Human Rights Commission in Geneva, along with such bastions of liberty as China, Cuba, Saudi Arabia and Zimbabwe."

The London Free: 25 April 2006 - Press After a decade or so of United Nations debates on the need to reform the world body, Secretary-General Kofi Annan tabled his proposals for change last month. He noted that "previous reform efforts . . . have addressed the symptoms rather than causes of the organization's weaknesses," and said that a "radically expanded range of activities calls for a radical overhaul of the UN secretariat."

In peacekeeping alone, he said that in the first 44 years of peacekeeping since the Suez War, 18 peace missions were authorized,while in the next 16 years since 1990, there were 42 new missions -- with costs tripling and staff numbers soaring.

While Annan is right in his assessment of the need for change, unmentioned is that he may be one of the reasons that need is so acute.

It was Winston Churchill, in 1946, who urged that the newly formed UN become "a force for action, and not merely a frothing of words . . .in a Tower of Babel."

Churchill's pithiness inspired the title of an excellent book -- Tower of Babble, by Israel's former UN ambassador, Dore Gold -- that shows how hopeless and craven the UN can be.

Annan even undermined UN weapons inspections aimed at bringing Saddam Hussein to heel long before the U.S. invasion of Iraq, and after Saddam had defied 16 UN resolutions to change his ways -- or else.

Now a new book is in the works by Claudia Rosett that promises to be a devastating indictment of UN corruption. April's Commentary magazine runs her assessment: "How Corrupt is the United Nations?"

The UN even misleads the world on its funding, claiming its "core" budget is $1.9 billion, with 29,000 employees. When various UN agencies are included, such as UNICEF, the UN Development Program (UNDP) and the World Food Program (WFP), the total budget is closer to $30 billion with 60,000 employees (excluding 80,000 peacekeeping (troops).

Saddam himself skimmed off up to $17 billion from the $64-billion program which, Rosett writes, "was buying 'milk' from a Chinese weapons manufacturer, contracting for 'vehicles' and 'detergent' with Sudan, and negotiating for missiles with North Korea."

Annan (whose son was implicated in the program scandal) has since described oil for food as a mistake in a good cause -- neglecting to point out that the UN collected 2.2 per cent of oil revenues as agent fees, roughly $1.4 billion into the secretary-general's spending fund.

Although founded to advance peace and prosperity, in the age of terror the UN "has been in most ways useless and in some ways positively dangerous," Rosett argues. It has become a gigantic bureaucracy. Its lax controls, diplomatic immunity and culture of impunity make the UN ripe for corruption and "for arms deals masked as medicine and soap."

The UN vowed "never again" to abdicate as it did in Rwanda and Srbrenica when faced with genocide. Yet in Darfur, with genocide underway, it has refrained from acting against Sudan -- which is a member of its Human Rights Commission in Geneva, along with such bastions of liberty as China, Cuba, Saudi Arabia and Zimbabwe.

In contravention of its own charter, Rosett says, the UN has evolved into "a predatory, undemocratic, unaccountable and self-serving vehicle for global government."

While facets such as the World Health Organization and UNESCO serve a purpose, the UN now threatens more than strengthens global peace, security and freedom.

What Ever Happened to Reforming the UN?

maybe its about time the UN had a little free-market competition???