Bush-Hu: Human rights focus of protests during US visit 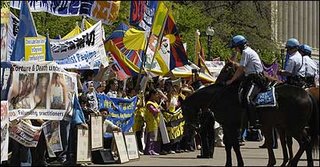 ''I'll continue to discuss with President Hu the importance of respecting human rights and freedoms of the Chinese people," Bush said.

Words of wisdom...hardly! Bush has not once mentioned the plight of Falun Gong during Hu's visit which is currently the number one genocide in Communist China. Both leaders deserved to be humiliated by Wang Wenyi's bold message as they have not done anything to stop the seven-year persecution launched by Jiang Zemin. Since 1999 thousands, if not millions, of Falun Gong practitioners have died from torture in the concentration camps where they have their organs harvested first to line the pockets of the commies. When will the two most powerful men on the planet take action to stop this atrocity? Words are not enough!

WASHINGTON (Boston Globe) 21 April 2006 -- In his first White House meeting with President Bush, President Hu Jintao of China pledged yesterday to address American grievances over the massive trade imbalance between the two countries and the valuation of China's currency.

But Hu offered few specifics on the promised reforms, and his message of economic friendship was marred by protesters denouncing human rights abuses in China, including allegations of harvesting organs from executed prisoners.

Speaking through a translator on the South Lawn of the White House after an elaborate military ceremony, Hu said the Chinese people are ''firmly committed to the path of peaceful development, and are making continuous progress in a modernization drive by carrying out the reform and opening-up program."

He said that China would ''continue to advance the reform" of the exchange rate for its currency, the yuan, and ''take positive steps in such areas as expanding market access."

Both are sore points for American businesses and US politicians, who say that China has kept an unfair advantage in the world market by setting an artificially low value for its currency, making its products cheaper than they should be.

US officials say the currency problem contributes to the record $202 billion trade deficit with China, another major US concern. US businesses contend that the deficit is exacerbated by the fact that US companies can't sell their products as freely in China as Chinese businesses can operating in the United States.

The visit provided no apparent breakthroughs on another major US policy goal: getting China to support more aggressive action against the nuclear programs of North Korea and Iran.

But Bush appeared upbeat, telling reporters during a photo opportunity with Hu in the Oval Office that he was heartened by Hu's pledges on the economy.

''He recognizes that a trade deficit with the United States, as substantial as it is, is unsustainable," Bush said. ''Market access is very important, and I appreciate your commitment to that, Mr. President."

Hu's four-day US visit, which included a dinner Tuesday at the home of Microsoft mogul Bill Gates in Seattle and a scheduled speech at Yale University today, has been dominated by economic issues.

But China's human rights record became a focus yesterday in the capital.

As Hu began speaking about expanding a ''win-win" economic friendship, a protester emerged from a pack of television cameramen and began screaming in Chinese that Hu's 'days were numbered." She also begged President Bush in English to stop the persecution of Falun Gong, a spiritual movement that is banned in China, before Secret Service agents led her away and charged her with disorderly conduct. She was later identified as Wang Wenyi, 47, a New York physician who writes for The Epoch Times, an English-language newspaper affiliated with Falun Gong.

White House officials said that Bush apologized in private for the disturbance.

A block from the White House, rival demonstrations by hundreds of people protested -- and welcomed -- the Chinese president. Falun Gong protesters yelled ''stop the killing" through megaphones, and then were drowned out by pro-China demonstrators playing anthems associated with the Chinese communist party.

Many protesters held up pictures of corpses that they said were dead Falun Gong practitioners whose organs had allegedly been harvested at labor camps in China. The allegation has been circulating since March, when Epoch Times printed an article that said an unnamed Chinese journalist had stumbled across information about the camps while interviewing doctors and nurses for an article about SARS.

China's foreign ministry spokesman has vigorously denied the report. State Department officials have toured the site of the alleged camp twice, but found no evidence of illicit organ harvesting there, the State Department said in a statement last week.

But the State Department has repeatedly raised concerns in its annual human rights reports about the imprisonment of thousands of Falun Gong practitioners and about allegations of organ harvesting in Chinese prisons.

On Wednesday, the House subcommittee on global human rights held a hearing on China during which activist and former labor camp prisoner Harry Wu testified that China's health ministry acknowledged at a World Health Organization meeting in November that 95 percent of its organ transplants use organs from executed prisoners.

''The current Chinese regime is one of the very worst violators of human rights in the entire world," Representative Chris Smith, a New Jersey Republican who chairs the subcommittee, said at the hearing. ''At the very least, US corporations should not be aiding and abetting that process."

Advocates working on behalf of Yang Jianli, a democracy activist and alumnus of Harvard University's Kennedy School of Government, secured the signatures of 119 members of Congress for a letter urging Bush to raise Yang's 2002 arrest with Hu.

A White House spokesman said that Bush didn't mention Yang's case specifically during this visit, but that he has raised it in the past.

Bush, who has said that promoting democracy and human rights is a central goal of his presidency, walked a tightrope yesterday between mentioning the problem of human rights in China and still sending a message of friendship.

Bush invited Hu for a social lunch with the wives of the two leaders, but not a highly coveted state dinner. In his speech welcoming Hu, Bush described human rights as a ''disagreement" between the two countries.

But activists and protesters hoped that the Bush administration would press the issue further.

''How far are we willing to sacrifice our values for economic advancement?" asked Jared Genser, a volunteer with the nonprofit prisoners rights organization, Freedom Now, that has worked to free Yang.
Posted by MaKina at 10:05 AM