Hu Jintao deserved to be heckled 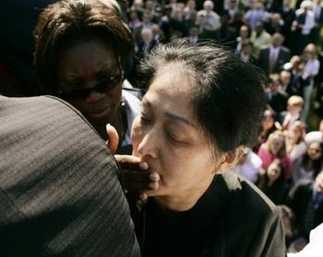 Falun Dafa Hao!
Hu 'your days are numbered'... Look here for an UPDATE.

China calls on US to crackdown onFalun Gong after heckling

UPDATE: 25 April 2006 - Well this news from Beijing comes as no surprise. Now the CCP (Chinese Communist Party) wants the US to oppress Falun Gong! If this is any reflection of China's new socialist democracy that Hu is talking about, I think they could use some more time to rethink that one over! This is a perfect example of the Communist rule of law being pushed over the free world every time we trade with them...except that this time they're pushing a bit much. Actually it is the best opportunity Beijing has had so far to further persecute the Falun Gong and to control the US all at the same time. Who is going to buy this package of deceit?

This is how one US representative sees the Beijing-Falun Gong relationship.

Smith, chairman of a House International Relations Committee human rights subcommittee, said Beijing had a "special hate" for Falun Gong. "Like all dictators and totalitarian terror systems, the [People's Republic of China] fears and hates what it cannot control. So it decided to destroy and intimidate those who practice Falun Gong," he said. (full report)

Here are the views from Christian Leaders:

"It is seems extremely hypocritical for the White House to roll out the red carpet for a world leader whose government supports the trampling and crushing of human rights. And, at the same time pursue prison time for a women fighting to end religious persecution and violence. Our message is clear; President Bush, support religious freedom and the First Amendment, and drop all charges against Dr. Wang."

UPDATE: 24 April 2006 - Go here to read Wenyi Wang's statement. Wang's next hearing is on May 3rd, World's Free Press day--let's support her every step of the way. It is interesting to note that Wang was censored by CNN. Before the interview she was asked (by CNN) not to mention organ harvesting--their excuse--it was going to be aired at supper time. However, during the interview she attempted to mention the organ-harvesting death camps but she was interrupted every time. So it went unreported. Look here to view the video.

Voice of support from the 'Traditional Values Coalition':

Chicago Tribune: ( … ) Now the chairman of the Traditional Values Coalition has come to the protestor's defense. TVC Chairman Rev. Louis P. Sheldon said today: “The home of the free should not be threatening to jail those who speak the truth.

Calling on the president to intervene and see that the charge of disorderly conduct that was lodged against the protestor is dismissed, Sheldon invoked the Chinese protests of 1989 as the wrong sort of precedent: “None of us can forget the footage of the young Chinese man who faced down the tank in Tiananmen Square. He disappeared shortly after that incident and has not been seen since.

“Mr. President, one can debate the protocol or politeness of what this woman did but, ultimately, isn’t there a transcending consideration here -- this woman spoke the truth, and no American wishes to see her punished for doing that.'' Sheldon said. "No government in the history of civilization has violated human rights as grievously and on a scale comparable to the People’s Republic of China.''(fullreport)

Other voices from protesters:

20 April 2006 - Hat tip to Epoch Times Reporter, Dr. Wang Wenyi, who courageously got her human rights message across in DC to President Bush and Hu Jintao. In so doing Wang's public appeal drew international attention to the plight of Falun Gong in China. Recently the Falun Gong( CIPFG) wrote an open letter to President Bush demanding a thorough independent investigation of all the jails/labour camps in China including the36 Nazi-like death camps that are being used to harvest organs from the Falun Gong for profit where their bodies are cremated to hide all evidence. So far a show-tour investigation did not reveal any evidence--the US have to dig deeper. The urgency of this situation cannot be overly stressed as thousands of (Falun Gong) lives are hanging in the balance. According to reliable sources the massive slaughtering has already begun. Part of Wang's strong message was meant for Hu Jintao who refuses to dialogue with the Falun Gong; "Hu your days are numbered" simply means--the time is now--stop the persecution--beware of karmic retribution; instant karma.In 2001, fearless Wang had astutely managed to get close enough to Jiang Zemin in Malta while he was visiting there to ask him to stop persecuting Falun Gong.

On Thursday morning, the New York-based pathologist, carrying a credential from a Falun Gong newspaper, fairly rocked Hu's ceremonial visit to the White House. Standing on a camera platform, she shouted in English:

Shifting back to Chinese, she yelled, "President Hu, your days are numbered. No more time for China's ruling party."

Naturally, she was wrestled off the platform and interrogated by swift-thinking Secret Service agents. We don't know if any of those agents instantly translated, but the words could have been construed as threatening.

Even in a country that celebrates free speech, you don't spontaneously vocalize grievances at state events. Disruptive citizens routinely are pulled out of congressional galleries. And don't even think about saying something snarky in a presidential rope line.

Still, we marvel at Dr. Wang's timing, even at what might be recorded as a landmark accomplishment in China's long march to a freer society. Her outburst came just after Bush, in his prepared remarks, urged Hu to allow Chinese to "speak freely."

The scene went out live on CNN International, only to be blacked out on the Chinese mainland. Enough might have slipped through, however, to have caused murmurs among Chinese dissidents, any one of whom would have been jailed and even tortured for such an impertinent protest.

The Falun Gong, of which Dr. Wang is a practitioner, has felt the communist lash most painfully. Sometimes depicted in Western media as a flaky cult, the movement offers a syncretistic update of Confucianism and Taoism. Its members stress meditation, exercise and a noncoercive lifestyle.

All that, together with the serious analysis of Hu's regime published in its international newspaper, runs afoul of collectivism, which even now provides the ruling communists a governing ideology. Falun Gong members regularly find themselves taken from their families, jailed, tortured and reportedly killed.

The Epoch Times also fills its pages with photographic evidence of their bloodied brethren. So this is the murderous milieu from which Dr. Wang thought it necessary to scramble onto her momentary platform. Her editors claim they didn't authorize her performance, which went well beyond a reporter's role.

But just maybe there was something deliciously reportorial about Dr. Wang's protest. It drew attention to the many victims of Beijing's oppression at a time when so much of the Western media gloss over the ugly side of modernizing China. Surely it was no ruder than some of the White House press corps' antics.

Boeing's Mulally turned oral cartwheels on the Everett stage when Hu announced his crews would be working on 80 jetliners, even holding out the prospect of 2,000. We share the joy. Trade does conduce to liberalization. China's growing commercial class has stepped up its demands for human rights.

The ceremony on the White House lawn was billed as an effort to "enhance dialogue." Dr. Wang, who will be admonished and no doubt kept away from future presidential appearances, made sure that happened.

Yale - One reporter was thrown out of the scrum after asking Hu if he saw the 1,000 protesters on the lawn...that is telling. It seems that tension was quite high amongst the protesters...

( … ) As the band struck up a number, two Falun Gong protesters stopped inches from their faces. They held placards detailing murders of dissidents during the Cultural Revolution and today. A drummer (in picture) skipped a beat, stepped forward toward one of the placard-bearers, and spit on the sidewalk by her feet. Then she stepped back and resumed the rhythm. (full report)

It is worth mentioning that Hu Jintao took the back road at the Paine Field airport to avoid Falun Gong practitioners on Tuesday morning. Of course, the Falun Gong (Vancouver group) were the only ones at that specific exit with banners. Some of them read "Stop killing Falun Gong", "Bring Jiang Zemin, Luo Gan, Liu Jing and Zhou Yongkang to Justice," "Demand that the CIPFG be Allowed to Investigate China's Forced Labor Camps for Truth," "Strongly Condemn the Barbaric Atrocities of Harvesting Organs from Live Falun Gong Practitioners in China's Forced Labor Camps," "Urgently Call for an End to the CCP's Nazi-like Atrocities," and "Heaven will Eliminate the CCP."

It's time for government officials to take notice of the true nature of the CCP (Chinese Communist Party).

Take a look at NTDTV's report. On the eve of Chinese President Hu Jintao's visit protesters in Seattle demanded that the Chinese Communist Party stop persecuting spiritual and democratic groups in China. The groups also wanted the world to know about the crimes and tyranny of the Communist regime.