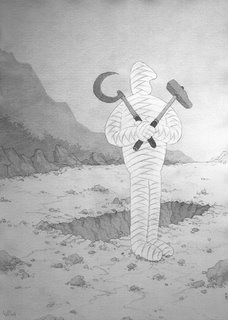 The China conduit: What Rogers Communications wants to beam straight into the homes of Chinese-Canadians: Raw, unfiltered, Chinese-state sanctioned TV

Please write to CRTC to express your views and oppose the Communist progaganda channels applying to broadcast on Canadian airwaves. Go here for details. For a reality check, view a few great reports exposing the extent of China’s propaganda strategy to fool the world. To access the reports, click on Home and then on State-run media.

Vancouver Sun: April 8, 2006 - by Daphne Bramham - The thought of the Chinese government beaming its message directly into the Canadian homes of Mandarin, Cantonese and Fujian speakers makes me just a wee bit queasy.

China has a dreadful record when it comes to human rights, free speech and freedom of religion. And while China is keen to have direct access to get its message to the Chinese diaspora around the world, its leaders have shown no interest in anyone else having direct access to their citizens either via the Internet or outside, uncensored broadcast media.

Yet Rogers Communications wants to be the conduit for nine digital channels owned and controlled by the Chinese government. Rogers wants the Canadian Radio-television and Telecommunications Commission to approve 24/7 broadcasts in Mandarin, Cantonese and Fujian with the programming coming directly from the state-run China International Television Corp. The programs would include everything -- children's shows, soap operas, documentaries, news.

Apparently, I'm not the only one with some concerns about it.

On March 31, the CRTC re-opened the public discussion on the Rogers' application. Its first call for public comments was made Dec. 16 and closed Jan. 16, which was less than ideal since Christmas holidays and the federal election consumed most people's time and attention then.

Close to 400 individuals and groups responded. Subsequent to that, the CRTC received requests from the China Insight Research Society, Canadians Against Propaganda and Burnaby-Douglas MP Bill Siksay to hold public hearings.

The most recent was this week when it protested another Rogers request to license Phoenix InfoNews, which the group says is tied to and partly owned by the Chinese government.

In re-opening the public debate, the CRTC says it wants evidence to back those claims such as transcripts or tapes of programs aired on any of the nine services along with details such as when they was aired.

It wants the material all translated into French or English and it wants it by May 3. Because despite the concerns, the CRTC made it clear in its March 31 notice that "going forward, requests to add non-Canadian, general interest, third-language services to the digital lists will be generally approved."

But finding evidence that Chinese television is laced with propaganda, hatred and anti-democratic messages may be difficult since propaganda often is not as much what is said but what isn't, omissions rather than lies.

I want to add another caution about propaganda.

It would be great to think that all Canadians -- regardless of how long they have lived here -- can discern propaganda from news. But this is wildly optimistic.

Sorting out what is propaganda from news or information doesn't just require access to a wide variety of sources against which to compare information and views.

It requires a willingness to view, listen or read things you might not agree with.

Given that, Fox News may be as effective at spreading a specific point of view as China Television.

However, it's noteworthy that when the CRTC approved al-Jazeera, the Arabic-language news and public affairs service, it put special conditions on it. It required broadcasters not to distribute "any abusive comment" and to keep tapes of everything in case concerns are raised about abusive comments.

There are 853,745 Canadians whose mother tongue is a Chinese language, according to the 2001 census. More than half speak only their mother tongue at home. Another 28 per cent speak mostly Chinese at home.

Every year for the past three, close to 40,000 people from China, Taiwan and Hong Kong came to Canada as permanent residents.

Many struggle with language, a new country, a new culture. Some can't practise their chosen professions even though their professional qualifications are the reason they were accepted as immigrants. Many, no doubt, feel adrift.

So, given a choice, will they watch CBC, CTV, Fox, NBC or the channel that offers them programming in their mother tongue at the end of another trying day?

Rogers is betting many will choose a familiar language, familiar programs and news from back home even if it is the Chinese Central Committee's view of the world.

My concern isn't just about propaganda.

I'm concerned about enculturation and how immigrants learn our society's values and traditions so that they can become full, contributing citizens.

They won't share Canadian experiences whether it's hockey, Canadian Idol, documentaries, political debates or the CBC's mini-series on Tommy Douglas.

And instead of improving their fluency in at least one of Canada's official languages, they will be able to hunker down at home in their mother tongue.

Existing multicultural channels are required to have local and Canadian news as well as some "western" programs -- although I've never been quite clear how The Simpsons or reruns of Magnum PI fit the CRTC definition of multicultural programming.

But these nine digital channels won't have any of that. Viewers will hear and see few, if any, references to Canada, British Columbia or Vancouver. They will see news not about where they live, but where they are from.

And if a million or so immigrants are more attuned to what's happening in Beijing than in Ottawa, shouldn't we all be concerned about what kind of Canadian citizens they will be?

Epoch Times: Exploiting the Media to Block the Flow of Information re: Falun Gong

Speaking of propaganda, some user tried to post offensive pro-CCP propaganda on my website. I looked up their site and they got propaganda such as the Tiananmen massacre never happened or was a no big deal etc etc. Either it is the direct arm of the CCP or it is some misguided "patriotic" Chinese influenced by them.
It shows that the CCP has an active propaganda arm in Canada.
..
In any case, I don't print it. I know from personal experience that what we don't hear hear about China is a thousand times worse than what we do hear, if we can hear anything at all.
It is interesting how they use free speech to promote a society that intends to destroy all the institutions of free speech.What we really need in Canada is an official counter propaganda agency to deal with their aggressive techniques. China will eventually be a military enemy of Canada and USA as long as the Chicoms are in power. I just hope we will be ready for them.
when there is any argument about anything point and counter-point is endless, one has to look at the intentions of the argue and draw them out to state their intentions. If their intentions are destructive then it is pointless to argue with them and only helps them. The only proper response to give them over and over again is an affirmation to support freedom and destroy totalitarianism.
In this case their intentions are to support an evil totalitarian government.
In any case they are free to post their propaganda elsewhere but not in my personal space. c

http://www.blogger.com/profile/5454719
>>>>>>>>>>>>>>>>>>>>>>>
PS makina. Take a look at the American NSA webpage and look at their needs and concerns under language requirements. It is quite satisfying to see that even if the politicians have got their priorities backwards at least the Intel agencies are on the mark.