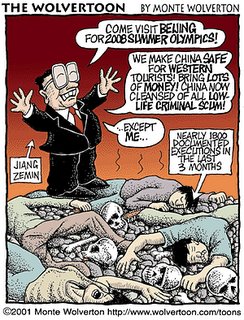 Here’s a quick take from the Strategy Page on Communist China and some human rights violations the CCP has shamelessly exported to the US and Canada. One can only imagine what it’s like in China or can we? One way of getting the message across is by staying out of the Olympics.

The governments ongoing campaign to crush the Falungong religious movement has extended to the United States , where several raids on pro-Falun gong writers, by thugs who appeared to be Chinese, have occurred. China is also engaged in ongoing jailings of Falungong members inside China. Many of the Falungong leaders are fleeing China, and keeping up a publicity campaign outside the country. Falungong is not a political operation, and was targetted mainly because the government does not tolerate nationwide organizations it cannot control. With Falungong, this is backfiring, and the government appears to be rising to the challenge by having overseas agents go after Falungong activists abroad. The government is also waging an extensive propaganda program, at home and abroad, against this new religion (which is a combination of Buddhism and several other beliefs.)...full report.

WASHINGTON (TMCnet) 13 April 2006-Amnesty International calls on President Bush to use his April 20 meeting with Chinese President Hu Jintao to encourage China to honor its commitment to initiate human rights reform prior to the Olympics . During their 2001 Olympic bid, Chinese officials promised to improve human rights, specifying in particular that they would allow freedom of the press. Unfortunately, Chinese authorities have failed to live up to their pledge. In fact, Amnesty International believes the human rights situation in China is deteriorating.

"President Bush must use this opportunity to secure a timetable with specific benchmarks for human rights improvements in China prior to the Beijing Olympics," said Amnesty International USA Executive Director Dr. William F Schulz. "Failure to do so would send the Chinese government the message that the mistreatment of its citizens is acceptable to the United States."

In an April 11 letter to President Bush, the organization called for an end to executions of political prisoners, abolition of the "re-education through labor" detention system, and a reversal on the freedom of worship ban.

"At this rate, the only world record China is guaranteed to earn at the 2008 games will be for the world's champion of executions," said T. Kumar, Amnesty International USA Advocacy Director for Asia and the Pacific. "When Chinese athletes cross the finish line in the summer Games, let's hope their achievement won't be overshadowed by China's poor finish in the world's human rights rankings."

According to Amnesty International research, the Chinese government has evicted thousands of Chinese citizens from their homes in preparation for the upcoming Games. Torture by law enforcement personnel is endemic throughout the country and many prisoners are known to have died in custody. Tibetans, Uighurs, "unofficial" church members, Falun Gong practitioners, democracy activists, journalists and political dissidents remain frequent targets of abuse and terror. Other targeted groups include trade union organizers, advocates of reform and internet activists.

"The scale of China's human rights violations is startling," said T. Kumar. "In spite of promises to improve human rights, China continues to account for upwards of 80 percent of all executions documented in the world, tortures numerous people to death, and denies the right to freedom of conscience, expression, religion and association. As the Olympics approach, the eyes of the world will be on China's human rights record. Now is the time for Chinese authorities to match their actions to their words."

In July 2001, Liu Qi, former major of Beijing and current Beijing Chinese Communist Party Secretary, promised that by hosting the Games China's "social and economic development would move forward," as would "progress on human rights." The vow was echoed by numerous other Chinese officials who promised everything from increased freedom of the press to improvements in health and education.